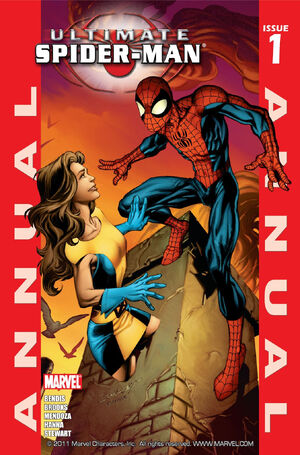 Appearing in "More Than You Bargained For"Edit

Synopsis for "More Than You Bargained For"Edit

Both Shadowcat and Spider-Man are forced to face a villain at a moment they really wish they did not have to. After defeating her foe, Shadowcat wishes she had a life, and complains to Colossus and Nightcrawler. Spider-Man, meanwhile, is forced to fight Rhino. After some time, he gets thrown into a building. The army arrives and tries to go for Rhino as well. Spider-Man uses a stick to pry open Rhino's control box, revealing the source of his power. Spider-Man jabs the stick into the source, destroying it and causing Rhino to collapse. The soldiers try to thank Spidey, but the commanding officer tries to arrest him. Spidey, like any vigilante, flees.

Kitty gets back to the school and realizes just how much she does not fit in. While glaring at Iceman for ignoring her, Storm asks if she is going to eat her potatoes. Spider-Man is thinking just the same thing, and wonders if he was to unmask, would he become popular and even get a girlfriend? He puts the thought aside, saying that anyone who would would get hurt. At that moment, Mary Jane walks by, and Peter watches her as she sits down elsewhere. As Peter goes to get seconds, Mary Jane does the same thing.

Kitty goes to sulk and Jean Grey comes up and says she needs a boyfriend. Kitty says that she can't find one in the school, and she could never go back to Bobby, someone Jean specified. The resulting conversation causes the tables to turn, with Jean discovering Kitty's immense feelings for Spider-Man. Jean says not to because Spider-Man could spell trouble, but Kitty decides to at least say Hi to him. Peter, meanwhile, finds negative comments about him and the incident with the Rhino online. The phone rings, and Peter answers it. It's Kitty, with Jean and Storm making weird comments in the background. These cause Peter to hang up. Kitty calls him again, and Peter listens to hear her name. He asks how she got the number, and she tells him "information". She asks if he is doing anything after school, and Peter asks if there is anything wrong. Kitty finally asks him out, and Peter says yes. Kitty, just to make sure, asks if he has a girlfriend, and he says he had one. Peter tells her to meet at his school out of costume before thanking her for calling him. After the call ends, Peter goes onto Google (misspelled, intentionally or not, as "Goggle") and finds a picture of Shadowcat, causing him to fall in love with her.

After school, Peter meets with Kitty. They go out to eat at a fast food restaurant, where Kitty is amazed by a corn dog on a stick. She even jokes about mutants thanking the guy who invented the idea after they take over the world, which Peter takes seriously for a second. Kitty then states that she really has no friends, but Peter says all heroes are like that. Flash then comes and punches him in the back before leaving. Kitty says she could easily hurt him, but Peter explains the concept of a secret identity. He even explains that Mary Jane broke up with him because she kept trying to let the secret out against his wishes, so Kitty tells of her similar thing with Iceman. When Flash and Kong come by again, the two heroes leave.

Peter takes her onto a roof, where they view the Ultimates' base and talk about a time when Spider-Man punched Nick Fury for being a jerk. Kitty asks if he simply can't date anyone, and he says he probably can't because he can't simultaneously protect the girlfriend. Kitty indirectly mentions if she could be his girlfriend since she can take care of himself, and promptly runs away before Peter can even register what she said. Kitty goes back up after realizing how stupid she was acting, and Peter says he wasn't really ashamed at all. They both call each other cute and almost kiss when an explosion sounds. They promptly go to investigate.

The explosion is revealed to come from Shocker, who shoves people aside for no apparent reason. Kitty appears and has one of Shocker's blast phase through her. As Spider-Man crawls behind Shocker, Kitty punches Shocker, breaking his shockers. Kitty tells Shocker not to look behind him, and when he does not take this advice, Spider-Man is there, causing him to flee. Spider-Man webs Shocker, and the audience cheers him.

Peter and Kitty go back to the rooftop, and start quoting Raiders of the Lost Ark. They almost kiss again, but the Blackbird arrives to pick her up. They exchange e-mails and phone numbers and finally kiss. Peter gets home later and they start chatting on e-mail.

Retrieved from "https://heykidscomics.fandom.com/wiki/Ultimate_Spider-Man_Annual_Vol_1_1?oldid=1461936"
Community content is available under CC-BY-SA unless otherwise noted.