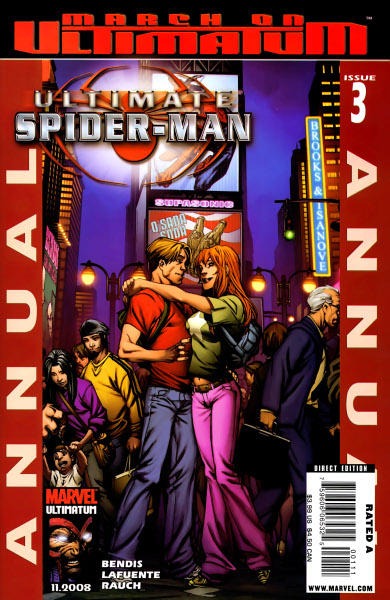 We'll do this thing with me and you...when I'm good and ready!!

The story begins with Mary Jane and Peter Parker lying on M.J.'s bed. The two recalls their incredible past experiences involving the likes of super-villains, until Mary Jane ask Peter for something explicative.

At Midtown High School, at the school halls Mary Jane noticed Peter. When Peter looks back at her, Mary Jane becomes embarrassed and fled. Peter reflects in shame until Kitty Pryde and Kenny McFarlane, who they saw the exchange between Mary Jane and Peter, worryingly asks Peter if he suffers a broken relationship. Peter tries to explain to them that there is no problem with his and Mary Jane's relationship and then huffily walks away.

Peter, as Spider-Man, swings through New York City thinking of talking and apologizing to Mary Jane. During his patrol, he noticed a high-speed police car chase through the city's streets. Spider-Man lands on the roof of the suspect's car, and only to discover that the car is without a driver and its being driven via remote control. Spider-Man attempted to stop the car by ripping a electronic device that controls the car from the ignition, however causing it to accelerate dangerously through the streets. Spider-Man then tries to create a wall of web to stop the car, but only for it to speed through it and causing a traffic accident. Spider-Man then makes a third successful attempt in stopping the car by creating a ramp of web and sends it flying and then quickly spun his web to hold the car in mid-air. After very briefly confronted by the police, the car then suddenly exploded and sending out paper money in which many nearby civilians eagerly started to gathering the spilled money.

On the next day at the school's television network studio, in which Mary Jane is present, Jessica Jones recounts the previous events of the car chase, with the spilled money costing a meager accumulation of a few hundred dollars and its connections to a unhindered bank robbery at the Union Bank in Brooklyn. Despite being asked by a student that the school only reports closed circuit news, Jessica strongly argues that the news focus on Spider-Man who was involved in the chase and is a student at the school, and that it is acceptably school-related. By bringing up the topic of Spider-Man, Jessica is even going as far to focus on revealing Spider-Man's identity.

During lunch, Mary Jane confronts Peter. She then told him to put aside her "suggestion" to Peter and warns him about Jessica's ambitions and about the car chase. Peter recounts the aftermath of the crash: the police, unlike what they had previously treated Spider-Man, thank him for his efforts in stopping the chase. Police Captain Frank Quaid then enter the crash scene and brief Spider-Man on his efforts and asks him to come to the station. At the station Quaid explained that the car chase was a distraction in allowing the real culprit to steal the Union Bank. Quaid then requested his technician assistant, Maggie in showing Spider-Man the footage of the actual robbery. In the footage, the culprit suddenly appears in the bank and begins robbing the bank until a flash blocked the camera's vision and with the culprit disappeared a few seconds later.

Quaid then explained to Spider-Man that the culprit is named by the police as Mysterio, and stated that he committed four similar robberies (including the robbery at the Union Bank) and that he has been a step ahead of the police. Quaid requested Spider-Man in helping the police to capture Mysterio.

After Mary Jane hears the story, she cheerfully decided to help in solving the case, much to Peter's displeasure and more concerned about MJ's suggestion. During the night in a seemingly abandoned warehouse at Greenwich Village, Maggie, the police assistant, revealing herself as an insider to Mysterio, urgently warns him about the police and their involvement with Spider-Man being on to him. However, Mysterio is unconcerned of Maggie's insistence, in which she demands on earning her share of her involvement and her leave and is distressed over his calmness. Indeed Maggie's assumptions came true as Spider-Man then suddenly intrudes into the warehouse and confronts Mysterio. After ineffectively punching through Mysterio's incorporeal head, Quaid leads a SWAT team into the building. Mysterio then deliberately causes a fiery explosion to the warehouse. In the burning chaos, Mysterio then hold Spider-Man in his grasp and foretold him to meet again in their next confrontation when he's (Mysterio) "good and ready" and disappears. Following his escape, everyone inside then quickly evacuated the now-burning building. With Mysterio's accomplice Maggie arrested, the police and Spider-Man realizes that capturing Mysterio in the future won't be an easy task.

Peter then appears to Mary Jane and reports on the leads that Maggie was an insider (as suggested by Mary Jane) who set surveillance equipments to the police department, his perception on Mysterio and the results of the investigation. The two then talk about the "suggestion", and they both agree of not "going all the way" yet and then they embraced in a kiss. A "part that is mandatory".

At the burnt remains of Mysterio's warehouse, Mysterio reappears and retrieves his necklaces and vanishes after uttering "Spider-Man".

An arrested and apparently insane woman dressed as Spider-Woman (Jessica Drew) appeared in the police station shouting "Embrace Change, Embrace Change!!" This is an obvious reference to Secret Invasion and queen Veranke (who impersonated Earth-616's Spider-Woman), both created by writer, Brian Michael Bendis.

Retrieved from "https://heykidscomics.fandom.com/wiki/Ultimate_Spider-Man_Annual_Vol_1_3?oldid=1507928"
Community content is available under CC-BY-SA unless otherwise noted.