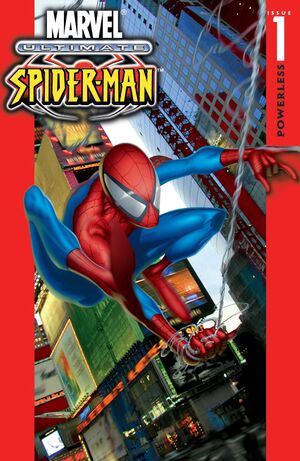 At Osborn Industries, Norman Osborn is hard at work with his genetic technicians. They are using various subjects, such as spiders, on the OZ project. As Norman has to talk with his lawyer over the phone urgently, his assistant fails to cap the container on the spider case, and the arachnid escapes. Elsewhere, in Queens, Peter Parker reads a chemistry book in a mall food court. As he tries to study, some rowdy teenagers pester him by throwing food. A sympathetic red-head (Mary Jane Watson) looks on with sadness. Before the other teens can stir up more trouble, Peter's uncle, Ben Parker, shows up and wrangles Mary Jane into a conversation with Peter and him.

The next day at his public school, Peter is further instigated by Flash and his big friend, but Harry Osborn shows up and helps the guys to leave Peter alone. Peter and Harry are friends even though Harry is on the team with the other lugs. Later that evening, Ben and May Parker discuss the possibility that Peter may have S.A.D., but Peter just shrugs it off. Harry comes by so they can study and it is revealed Peter's parents had died in a plane crash. When Peter trails off about an adhesive invention his father had worked on before dying, Harry ends up leaving. Norman is too busy to be bothered with Harry when he tries to remind his father his class will be in the lab the next day. As the class is going through Osborn Industries, Peter is bitten on the hand by the same spider shown at the beginning. Even though he has a seizure, he recovers after blacking out. Norman has a meeting to discuss what to do about Peter, decides to pay his hospital bill, and notes that we wants to keep an eye on the boy.

In school the next day, the heckling continues but as Flash's pal Kong is about to trip Peter, Peter reacts instinctively and flattens him onto the ground. Peter faints again and is taken to the hospital. He has blood taken, but the sample is replaced by one of Osborn's men. As Norman examines the blood, he notices the toxins will kill Peter. He decides to send his goon Shaw to kill him before that happens, so that no one finds out he died because of his Oscorp. When Shaw tries to run down Peter with his car, Peter reacts for some reason (spider Sense), and leaps over the car. When Shaw reports back in, Norman aborts the kill so that he may study the boy further. Peter begins to research and realize the spider has affected him somehow. After a confrontation with May and Ben, Peter wakes up in the middle of the night and tries to climb the wall. The issue ends with Peter hanging upside down from the ceiling.

Retrieved from "https://heykidscomics.fandom.com/wiki/Ultimate_Spider-Man_Vol_1_1?oldid=1461945"
Community content is available under CC-BY-SA unless otherwise noted.