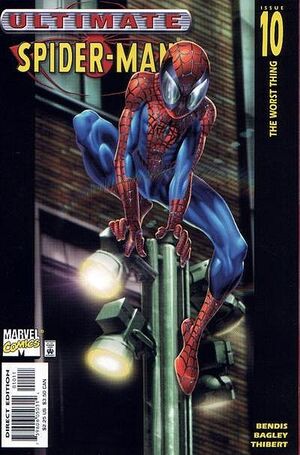 How about that? So what do you think is up with all these costume critters poppin' up all over the place? Dan here thinks it's a fad. Like what did you say? Like break-dancing.

Appearing in "The Worst Thing"Edit

Synopsis for "The Worst Thing"Edit

The Kingpin catches Spider-Man in his office and he immediately tries to stop him, but only the intervention of Electro permits them to knock him out. Quickly the Kingpin pulls Spider-Man's mask off, just to find out that he is an anonymous kid. So, he orders to toss the unconscious Spider-Man out of the window, keeping for self the mask. Peter survives the fall, but the next day he is constrained to cancel his date with Mary Jane, due to the strong pains caused by the fight with Electro.

The next day, Wilson Fisk faces Mr.Big, suspecting he may have led Spider-Man to him. After obtaining a confirmation, he obliges Ox and Montana to hold steady Mr. Big while he puts Spider-Man's mask on him and he smashes his skull with his own hands. The corpse will be found the day after in the river.

Meanwhile at school, Peter apologizes with Mary Jane and, during a lesson, he remembers of the security cameras in Fisk's tower and he gets an idea on how to find some evidences of Kingpin's crimes.

Retrieved from "https://heykidscomics.fandom.com/wiki/Ultimate_Spider-Man_Vol_1_10?oldid=1461973"
Community content is available under CC-BY-SA unless otherwise noted.