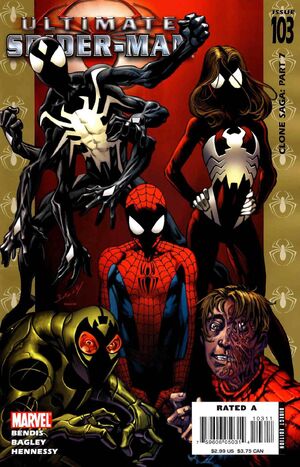 I can always make more.

Jessica learns that Octavius its Creator, and threatened that he would kill him. Fantastic Four saves Mary Jane at the request of Peter. At this moment Kaine dies. Peter learned that Otto worked for the CIA, and that Richard Parker is not a father and a clone of Peter. After this, Peter offers Nick Fury deal, so he left it and clones alone with Otto. Fury agrees and takes his team. During the battle with Octavius dies Tarantula. Peter and Jessica learn about new abilities Doctor Octopus.

Retrieved from "https://heykidscomics.fandom.com/wiki/Ultimate_Spider-Man_Vol_1_103?oldid=1488965"
Community content is available under CC-BY-SA unless otherwise noted.