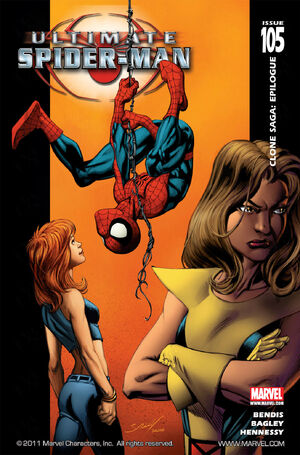 -- Peter Parker talking to Aunt May.

Spider man is not going to refuse from its abilities, he goes to the hospital to Aunt May, there he learns from Susan, that Richard died of old age. Nick Fury visits Spider-Man and releases him from arrest after that he goes away. May come to herself, and was reconciled with Peter. Kitty and the X-Men will know that Aunt May know the mystery of Peter. Kitty asks Professor X erase the memory of Aunt May, but he refuses, she very upset, but Jean Grey thinks that the Professor rights and gone and for the Kitty. Peter went to find his female clone, and finds her. Jessica was waiting for Peter between them was the conversation. Peter asked his clone that she was going to do. The woman Spider told him that not return to its creators, and that will live as Jessica Drew and not as Peter Parker, and then they parted. In the Building of S.H.I.E.L.D. Nick Fury show prisoners, among whom there were a clone of Gwen Stacy and the clone of Peter on behalf of Scorpio, Nick Fury said that we should continue to work. Peter newly reconciled with Mary Jane, but Kitty sees them together and not happy about this.

Retrieved from "https://heykidscomics.fandom.com/wiki/Ultimate_Spider-Man_Vol_1_105?oldid=1462123"
Community content is available under CC-BY-SA unless otherwise noted.