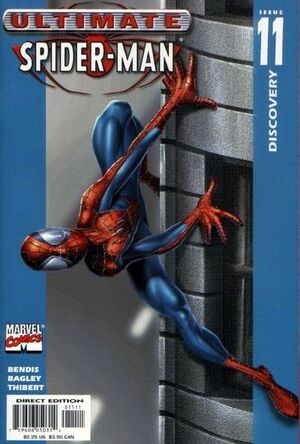 This costume fad. It's quite annoying.

At school, Peter Parker is asked to meet Doctor Bradley, a psychiatrist who is giving her support on students directly involved in the Green Goblin's attack at the school. Annoyed by the intrusive questions of the psychiatrist, Peter decides to interrupt the conversation, but, leaving the room, he meets Liz Allan, who is visibly shaken by that events.

Later, Peter succeeds in obtaining information about the Fisk Tower security system, discovering that all the recorded video are stored in a storage facility inside the place. So, he decides to sneak in Fisk Tower another time. While fighting with the security personnel, Spider-Man accidentally smashes an electricity generator, making the light in the building go off and so making the Kingpin realize that someone has entered his HQ. Electro and the Enforcers are sent to take care of the menace.

Retrieved from "https://heykidscomics.fandom.com/wiki/Ultimate_Spider-Man_Vol_1_11?oldid=1461975"
Community content is available under CC-BY-SA unless otherwise noted.