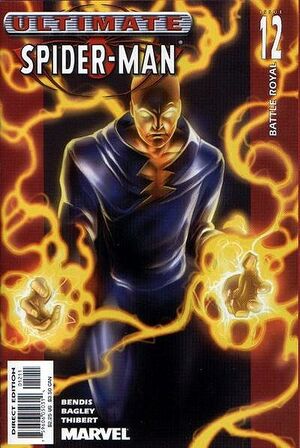 You are so fat -- that when you cut yourself shaving... marshmallow fluff comes out.

Spider-Man succeeds in knocking out the Enforcers and Electro and tries to leave the place with the security registrations. However, he is soon stopped by the Kingpin, who has decided to take care personally of the problem. Spider-Man again succeeds in immobilizing his foe and runs away.

The next day, Ben Urich finds on his desk the disks stolen by Peter. Now he can use them as proof to accuse Wilson Fisk of Mr. Big murder. Thus, Fisk is forced to leave the country in order to avoid the arrest.

Retrieved from "https://heykidscomics.fandom.com/wiki/Ultimate_Spider-Man_Vol_1_12?oldid=1461977"
Community content is available under CC-BY-SA unless otherwise noted.