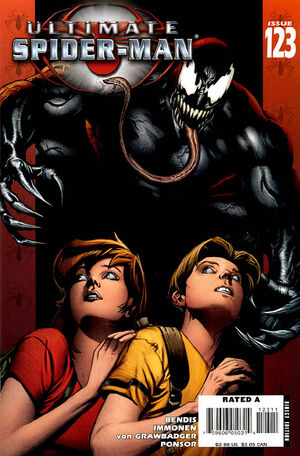 Have you ever had a dream that was so real, you're not sure if it really happened?

Appearing in "War of the Symbiotes: Part 1"Edit

Synopsis for "War of the Symbiotes: Part 1"Edit

In Central Park, a morose and vengeful Eddie Brock Jr. is sitting on a park bench recalling to a passerby of his past experience following after in possessing the symbiote suit:

As Venom, he survived the electrocution in his encountered with Peter Parker, and has been feeding/assimilating people to prolong the symbiote's nourishment, in which Brock is not entirely disturbed with the people he ate. As Eddie, he later saw Spider-Man fighting against the Rhino in a construction yard. He then sense that the symbiote suit has a bonding reaction to Peter, as he briefly wore the suit, and is confused as to what it wants: to kill Spider-Man or to "kiss" him.

In the night, following Spider-Man's victory over Rhino, Eddie examines the police/military restricted construction yard. Unbeknown to Brock, Silver Sable and the Wild Pack have been tracking him and soon confronted him into capturing him. Brock immediately turns into Venom and attacks the Wild Pack. After subduing the Wild Pack, Venom then fought Sable into a standstill, and he later escapes.

In the present, as Brock narrates to different passerby, he expresses that in truth he never fought and laments that he is worthless in facing "professional hunters" and "little super heroes". But he knew that he ever felt "great" is being near Spider-Man.

Sometime after escaping from Silver Sable and the Wild Pack, Eddie senses Peter while he and his class are on a field trip in the Metropolitan Museum of Art, and Eddie enters the museum in finding Peter. Peter too felt Eddie's presence due to wearing the symbiote suit. Eddie is confronted by the museum's security guards, who see him as a troubling looking individual and demands him to leave. Agitated, Eddie turns into Venom and 'eat' the guards. Venom burst into the Museum's hall and demands in seeing Peter. Peter quickly changes into Spider-Man and battles Venom. Spider-Man seals the entrances with his web in preventing Venom from attacking anyone, as Mary Jane looks on. After dodging and trading blows with Venom, Spider-Man is then grab hold by Venom and sending both of them into the frontal establishment of the museum. Still holding onto Spider-Man, Venom is about to devour him until being blasted by Silver Sable and the Wild Pack.

At this point, a different passerby interrupts Brock's story and confirms if he was the "monster from the museum" that he saw on the news. Brock then glances to the man and immediately change into Venom and devour him.

Retrieved from "https://heykidscomics.fandom.com/wiki/Ultimate_Spider-Man_Vol_1_123?oldid=1462159"
Community content is available under CC-BY-SA unless otherwise noted.