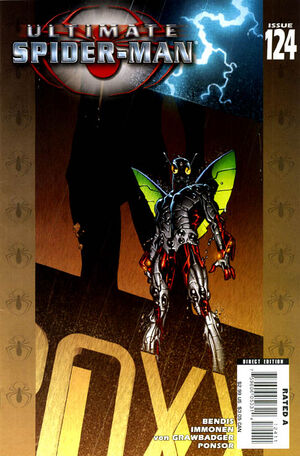 Appearing in "War of the Symbiotes: Part 2"Edit

Synopsis for "War of the Symbiotes: Part 2"Edit

Months ago, Spider-Man defeated the Rhino in the Brooklyn Yards. After leaving, Spider-Man felt some unexplainable pain in his head. He then swing from Brooklyn as Eddie Brock watches him from an alley way.

On the next day in Midtown High, Peter Parker talks to Mary Jane Watson of not feeling that pain anymore, but is dismay in learning that while he fought the Rhino, Peter's costume showed a tear to his rear-end that reveal his butt in which is posted online by amateur footage. Mary Jane comforts Peter and reassure him that she was very impress of him in facing the Rhino.

In a research room with a storage chamber, the Beetle approaches the chamber and retrieve a vial of black substance. Spider-Man looks on the Beetle's handiwork until a security guard enters the room and encounters the Beetle. Spider-Man quickly breaks into the room and stopping the Beetle from killing the guard. As the two battle, Spider-Man inadvertently cause the Beetle to drop the vial he is after with his webshooters. The Beetle paralyze Spider-Man with plasma and immediately depart without the ruined sample. After Spider-Man free from the plasma which dissipates, he notice the spilled vial and it's contents. As arriving Roxxon security forces arrive, Spider-Man fled the building.

On the next day at the Daily Bugle, at his workstation, Peter calls Mary Jane of his encounter with the Beetle and what he is after from Roxxon. He notices that while he looks up Roxxon on the internet, the country of Latveria seems to be involve with the company. Peter then receives another call, revealing to be Nick Fury who wants to see him on the Bugle's rooftop.

On the Daily Bugle's rooftop, Peter and Nick Fury converse on Peter's encounter with the Beetle. Fury informs Peter that S.H.I.E.L.D. and himself presently don't know what the Beetle's intention was, and the only information is that he has connection to Latveria. Furthermore, it is given that the situation with the Beetle is a international incident and favors Peter not to be involve in the investigation. After Peter comply to Fury's demand and leave the rooftop, a SHIELD agent ask Fury if Peter will "behave" in which Fury replies that he won't. The agent then see's that Fury intentionally wants Peter to be involve, in which Fury amusingly replies "yep".

Flash-forward to the Metropolitan Museum of Art, Venom have reverted back to a weaken Eddie Brock as Sable and the Wild Pack converges on Eddie and Spider-Man. Sable orders the Wild Pack to capture only Brock. As Spider-Man huddles on the pavement, Sable thanks him for his "assist(ance)", and departs with the Wild Pack in their vehicle.

Retrieved from "https://heykidscomics.fandom.com/wiki/Ultimate_Spider-Man_Vol_1_124?oldid=1462161"
Community content is available under CC-BY-SA unless otherwise noted.