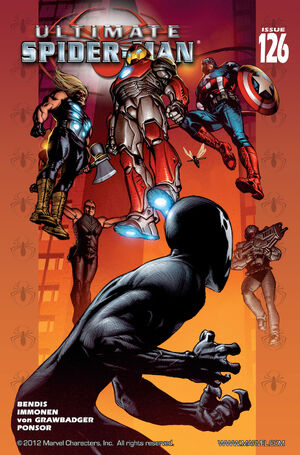 Kid, countries are already fighting over it. Huge corporations are hiring soldiers and fighting over it. We got assassins and bounty hunters and God-knows-what looking for it. Truth be told, kid, and I hate to tell it to you like this... your father may have started the next damn world war.

-- Nick Fury, to Spider-Man about the Venom 'suit'.

Appearing in "War of the Symbiotes: Part 4"Edit

Synopsis for "War of the Symbiotes: Part 4"Edit

The next afternoon, Peter finds himself awake in his room and is not warmly greeted by Aunt May. She softly reprimanded Peter for being out late as Spider-Man and was worried about him, and left the room. Peter then heads down to the basement and receives an email from Nick Fury on his computer informing him to come to the Triskelion once he is awake.

Peter then dressed as Spider-Man and swings to the Triskelion and meets Fury, Tony Stark and Captain America. Fury explains to Spider-Man that the previous night after he was stricken down by Thor into unconsciousness, S.H.I.E.L.D. and the Ultimates have checked his health and fortunately find it normal ("or as normal as (he) get") and have taken him home without any incidents. Spider-Man then questions Fury on Eddie Brock, in which Fury informs that Brock was lost in the crowds at the scene of the battle and that Silver Sable and the Wild Packs have been detained as well along with the symbiote suit. Spider-Man demands Fury to have the "suit" destroy but Fury tells him that there is something that it connects to one of its creators, Peter's father, Richard Parker, and believes that it is involve in a type of "biological warfare". Spider-Man insists that the creation of the suit by his father was an effort to cure cancer. But Fury furthermore reveals that nations and huge corporations are struggling for the symbiote and that he fears that Richard may have started the next "world war".

Retrieved from "https://heykidscomics.fandom.com/wiki/Ultimate_Spider-Man_Vol_1_126?oldid=1462165"
Community content is available under CC-BY-SA unless otherwise noted.