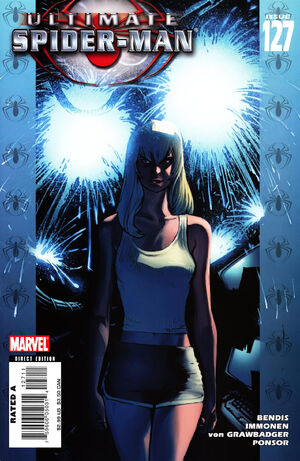 Appearing in "War of the Symbiotes: Part 5"Edit

Synopsis for "War of the Symbiotes: Part 5"Edit

Three weeks ago at the maximum security prison at Ryker's Island...

A very bruised Curt Conners is approached by the warden and several guards who inform him that he is being transferred by "some famous people."

Two weeks later at S.H.I.E.L.D.'s Triskelion, the clone of Gwen Stacy is interrogated in a large empty room. Every questions she answers are accurately what she remembered of her previous life, even when she was killed by Carnage. Her questioners (who are shielded in a room) are Tony Stark and Curt Conners. Conners, being solely responsible creating the Carnage parasite, is having a hard time to adjust that Gwen is the symbiote. Unsure that she maybe a pure symbiote, the two ask Gwen if she could transform into Carnage. However, as she tried to turn, a explosion occurs. Tony and Curt regain themselves of what just happen and notice that Gwen is missing. On the other side of the Triskelion, the Green Goblin (responsible for the explosion) cause a jailbreak as he notice Gwen walking pass him and then reaching outside of the facility, swimming to Manhattan's harbors.

In the present at Midtown High, Peter Parker and Mary Jane startlingly finds themselves confronted by Eddie Brock after his three months absence. Brock demands Peter to bring back the Venom suit or he will threaten to expose his identity. Peter, un-intimidated by him, ask him how he could be crazy to want the symbiote back given that he is free from committing horrible acts and could start his life over. Brock, unfazed, demands it back before leaving. Mary Jane ask Peter what he will do...

As Spider-Man, swings in rainy New York City to the Baxter Building to gain help from the Fantastic Four but find that they are occupied and gone. Scratching off help from both the police and Nick Fury (who is trapped in Earth-31916), Spider-Man decides to find help from the Ultimates. But, he came too late to find of the team leaving the city. Helpless, he decides to be himself in researching about the symbiote.

At the Daily Bugle, Peter learns about Trask Industry, having stolen his father's idea and rights to the symbiote. He soon discover that his, Eddie's and his father, are practically erase from any ties to the symbiote. Finding without any leads, Peter left. Nearby, Ben Urich is worried and concern about Peter and checks on his work station's computer.

Returning to his home as Spider-Man, he discover Gwen Stacy, bearing Carnage's face, who apologize and needs help.

Retrieved from "https://heykidscomics.fandom.com/wiki/Ultimate_Spider-Man_Vol_1_127?oldid=1462167"
Community content is available under CC-BY-SA unless otherwise noted.