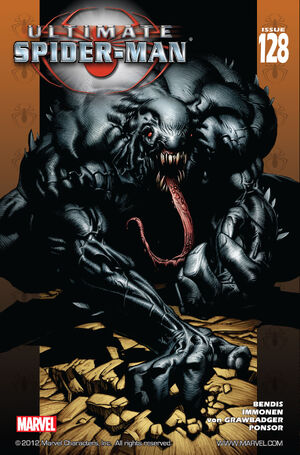 You're- you're sayin' you actually fought Spider-Man? You're saying you're some sort of-- what exactly?

Appearing in "War of the Symbiotes: Part 6"Edit

Synopsis for "War of the Symbiotes: Part 6"Edit

In her Carnage state, Gwen goes to Peter's house scared and alone. As she's explaining what happened to her, Eddie Brock shows up at the door and ask Aunt May in seeing Peter. However, May greets him with a revolver, having experienced the loss of her husband from the likes of Brock, telling him to leave Peter alone. Unfortunately, Brock quickly grabs May's revolver and hold her at gunpoint. But Spider-Man swings in and subdue Brock. Angered, Spider-Man take Eddie with to a vacant industrial area on the surrounding rooftops.

There they start to tussle when Gwen follows them and turns into Carnage, who attacks Brock, who turns into Venom. In the end, the Venom symbiote absorbs the Carnage symbiote, restoring Gwen back to normal. Venom quickly escaped into the sewers via a sewer vent as Iron Man and SHIELD agents arrived to the scene. Gwen is later analyzed at the Triskelon and subsequently released at the behest of Tony Stark and the orders of Director Danvers to the Parkers.

Meanwhile at Central Park, as Eddie tells his latest story to another passerby on a bench in the park. When the passerby questions Brock that if he was Venom that fought Spider-Man, Brock then changes into Venom and attempt to devour him; however, the man whips out a little device that sucks up Eddie and the symbiote entirely. The man reveals himself to be the Beetle as he contacts his superiors of his successful capture, and then flying off from Central Park on his way back to Latveria with the symbiote.

Retrieved from "https://heykidscomics.fandom.com/wiki/Ultimate_Spider-Man_Vol_1_128?oldid=1462169"
Community content is available under CC-BY-SA unless otherwise noted.