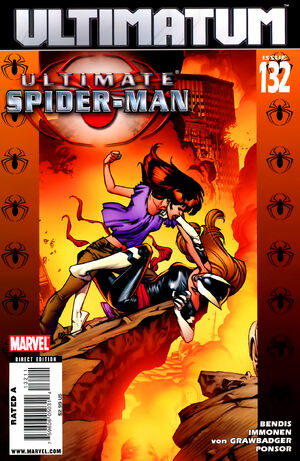 The friends of Peter Parker move to the rooftops to assess the situation of New York. There they observe Doctor Strange's Sanctum Sanctorum emulating a purple light. After Kitty states her concern for Peter, a jealous MJ comes out swinging, knocking Kitty to the ground. MJ blames Kitty for sending Peter out there to risk her life and after both realizing Kitty's love for Peter, MJ lets her go to help Spider-Man deal with a damaged New York.

In a flashback, Doctor Strange shows Peter around his Sanctum Sanctorum, showing him the Orb of Acmantata, the doorway to the Dark Dimension. In the present, Spider-Man and the Hulk find the doorway open, releasing its dangers from another realm. As they fight these beings, Doctor Strange steps out, revealing himself possessed by Nightmare. Nightmare, familiar with Peter's fears, takes hold of both Peter and the Hulk, creating monstrous beings of their biggest nightmares. As Hulk deals with all those he murdered in the past, Peter is tossed by nightmarish versions of his enemies. Spider-Woman swings towards the purple light, honoring her Aunt May's request to save Peter. Hulk shrugs off his opponents only to rampage towards Nightmare, smashing all in his way, including the Orb of Acmantata. The energy of the Orb expands, leaving everyone to gaze in horror.

Retrieved from "https://heykidscomics.fandom.com/wiki/Ultimate_Spider-Man_Vol_1_132?oldid=1462177"
Community content is available under CC-BY-SA unless otherwise noted.