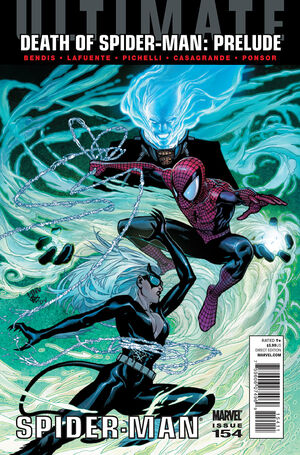 You have to put the key down or we will die!! Everyone in the city might die!!!

In Queens, Mary Jane meets Gwen Stacy coming out of Peter’s house and Gwen informs her that she’s back living in the house, but that she and Peter are not dating anymore. Mary Jane asks if Peter is home, but Gwen tells her he is off being Spider-Man, and lets her in on the whole “superhero training” scheme cooked up by Carol Danvers, which Mary Jane thinks is a good idea. Their conversation is interrupted by a giant explosion off in the distance (which was caused by Black Cat using the Zodiac Key).

In Soho, Mysterio has the Zodiac Kay and uses it to blast Iron Man, whose energy shields hold, but use up almost all of his spare power. Iron Man says it's the strongest thing he’s ever faced and he tells Peter to run away. Mysterio is ready to unleash another blast when the then-prone Black Cat kicks him in the face. Peter jumps in and also kicks him in the face. Mysterio fires off another blast, which Black Cat and Spider-Man dodged, but Iron Man doesn’t. Tony’s outer armor is completely destroyed, and he is knocked out of the sky.

Spider-Man uses his webs to steal the Key from Mysterio. Black Cat urges Peter to put the Key down, warning him of the destruction it can bring. Mysterio puts a gun to Peter’s head and demands he give over the Key. Spider-Man fights off both Mysterio and the Black Cat. He tries to calm them both down, when the Key starts to glow. A tornado appears and starts whirling around the debris from the previous explosion. Realizing it was his fault, Peter asks it to stop and drops the Key.

Mysterio points his gun at Peter and the Black Cat, and again demands they step away from the Zodiac Key. After a second three-way fight, Mysterio emerges on top and attempts to grab the key, only to have the unarmored Tony Stark grab him from behind, stick his arm down Mysterio’s neck and rip out his robo-heart. Tony informs them this Mysterio was a robotic puppet being controlled by someone using advanced virtual reality. After inquiring as to whether Black Cat is single, Tony uses a force field to scoop up the Zodiac Key and flies away to research it. As he leaves, he calls in a S.H.I.E.L.D. clean-up crew and tells Peter to come look for him when he wants a job. Spider-Man and Black Cat stay to help the survivors out of the rubble.

At dawn back in Queens, Mary Jane finds Peter sitting outside her window. He tells her that it was one of his worst nights as Spider-Man, and she invites him inside.

In this issue, is revealed that Tony Stark has seven doctorates.

Retrieved from "https://heykidscomics.fandom.com/wiki/Ultimate_Spider-Man_Vol_1_154?oldid=1462189"
Community content is available under CC-BY-SA unless otherwise noted.