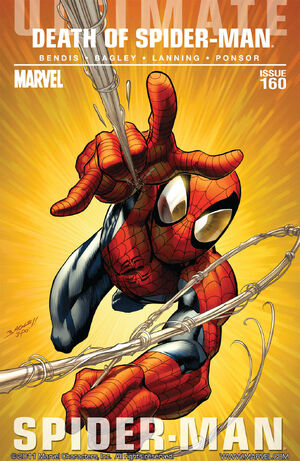 Mary Jane tries desperately to reach Peter over the phone to no avail. She suddenly sees a bolt of lightning flash in the direction of Peter's house and panics. Her mother attempts to stop her from running out of the house. Meanwhile Peter carries Aunt May and Gwen to safety as Osborn attacks. After ordering Gwen to get Aunt May away from the battleground, no matter what, he rushes off, ignoring May's pleas. Osborn and Peter trade punches. Losing blood and stamina, Spider-Man makes a last ditch effort to defeat Osborn by waking up Johnny, who is lying unconscious. The Human Torch attacks Goblin, but as the Goblin's powers are fire based, he manages to absorb Johny's flame right from his body through their physical contact and repels him. Johnny apologizes before drifting off into unconsciousness again.

The Goblin then attempts to finish Spider-Man off, but is stopped by MJ, who rams a truck into him. Peter and MJ embrace in the middle of the battle before he throws her (literally) out of harms way and webs her up safely.

Using the last of his strength, Peter bashes Osborn, finally finishing him by throwing the truck on top of him. MJ begins to cheer him on, but the truck suddenly blows up in Peter's face, throwing him away. The onlookers stare in horror. An awakened Johnny and MJ run up to him. MJ pleads with the onlookers to call an ambulance after rebuffing Johnny's offer to fly him out of there (as they can't move him due to the severity of his injuries). She finally calls one herself as a defiant Aunt May and Gwen come running over. Aunt May hugs Peter and weeps, begging him to hold on.

Johnny then checks Peter for a pulse and shakes his head. Aunt May begins crying uncontrollably and MJ begins weeping while cradling his lifeless body...

Finally, in the midst of the flames, a smirking (now human) Norman Osborn also dies too.

Miles Morales was supposedly to be in the crowd that witnessed Peter's death. Even in Ultimate Comics Spider-Man #4 he is shown behind Mary Jane, but in this comic, there were flames behind her.

Retrieved from "https://heykidscomics.fandom.com/wiki/Ultimate_Spider-Man_Vol_1_160?oldid=1462198"
Community content is available under CC-BY-SA unless otherwise noted.