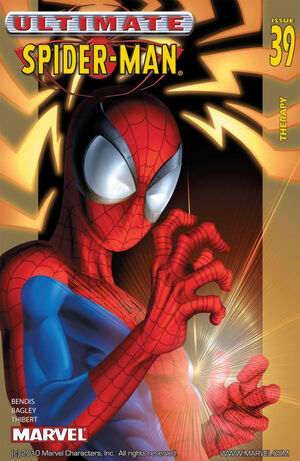 Nick Fury is enjoying a meal at a restaurant when he receives a call that he is being followed. Walking into an alleyway, it is revealed that his follower is none other than Peter Parker. Pleading to Fury to take his powers away from him, Peter explains his recent battle with Eddie and why he doesn’t deserve his powers anymore. Unfortunately for Peter, Fury declines and tells Peter that he has a future ahead of him on the Ultimates and that he will just have to live with the powers in the mean time and simply just be a teenager.

Frustrated with Fury’s response to his pleas, Peter heads once again to Empire State University to find that Eddie had recently been there and got all of his belongings from his old dorm room. Immediately heading to the laboratory again, Peter meets an old friend Dr. Curt Connors, who explains to Peter that genetics may be one thing man should never have a hand in.

Peter once again leaves in a fit of anger, and stands upon the rooftop of the laboratory. His spider senses go off and he believes it to be Eddie. Looking around, however, he stands alone once again.

Retrieved from "https://heykidscomics.fandom.com/wiki/Ultimate_Spider-Man_Vol_1_39?oldid=1504162"
Community content is available under CC-BY-SA unless otherwise noted.