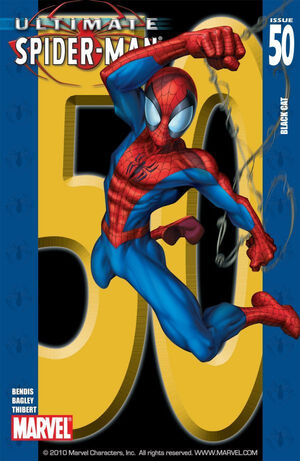 On the Chrysler Building, a woman dressed in black, Black Cat, watches a office room in a skyscraper. She then uses a grappling dart, which she fires at the top of the building. Black Cat then slides down the line and onto the rooftop.

Two security guards on the ground floor notice a disturbance on the rooftop from the security cameras. The older guard sends the other to investigate. The younger guard arrives on the rooftop and finds nothing. A gust of wind blows his hat off and he chases after it. Black Cat then enters the rooftop door and locks the guard out. The younger guard calls the older guard to open the door, as Black Cat sneaks through the building. After avoiding a cleaner, Black Cat blocks the security cameras and breaks into the room she was studying before. She then finds the room's safe, and discovering it doesn't have a combination lock, she examines the room's surroundings and unearths the lock to the safe inside the desk's filing cabinet. After unlocking the safe, she finds what she is looking for: a broken piece of a tablet.

Two security guards, including the younger guard from before, have realize that there is a break-in and notice that the office which Black Cat is in is open. Black Cat hides on the ceiling as the guards investigate and spot the open safe. One of the guards suddenly trips and accidentally discharges his gun. The bullet ricochets and hits a fire sprinkler, causing it to unleash a large amount of water, heavily drenching the security guards. Black Cat escapes the room and heads to the roof. As she is about to use the line she set up, she is then confronted by Spider-Man.

Spider-Man at first is stunned by her appearance, and is surprised to see Black Cat leap over the edge of the building they are on. He follows to rescue her, only to realize that she had merely clung to the side of the building and tricked him into falling. Spider-Man tries to use his web-shooter but oddly finds them to be not working. On the rooftop, Black Cat is about to flee when Spider-Man leaps back onto the rooftop, after using his wall-crawling ability. Spider-Man tries to block her way until Black Cat fights and easily subdues him. She then leaves right after telling to Spider-Man: "Crossed a black cat... seven years bad luck."

Spider-Man recovers himself and tries to chase after Black Cat, but suddenly trips himself. As he lies on the ground, Spider-Man and Black Cat momentarily look at each other. Black Cat then suddenly leave and vanishes into the city.

At the Parker's residence, Peter is thinking about his experience with Black Cat and is interrupted by Mary Jane. The two are in the basement studying for their school mid-terms. Peter tells M.J. about deciding on whether to quit being Spider-Man or not, much to M.J.'s delight. Peter at first suggest that M.J. doesn't want him to be Spider-Man, but M.J. states simply that she doesn't want him to stop being the hero and do what he has to do. However, Peter further states that the people he fights against can be sometime very dangerous to him, and even recount his actions with the Black Cat (who he doesn't mention her to M.J.) in which he almost die. Overall, Peter sums that "punching someone with octopus arms" is not "fun". Mary Jane counters his statement that punching Norman Osborne is fun, and Peter seems to agree. After Peter finishes talking about himself, he asks M.J. about her story. M.J. explains to him that her father, Craig, was caught with another woman, and how she hates him for doing that. Peter reassures M.J. that if he marries her, he won't cheat on her. Moved by Peter's commitment, M.J. admits her love for him. The two kiss and are called out of the basement by May Parker, who tells M.J. that her father has arrived.

A stern Craig Watson carries M.J.'s diary, much to his daughter's surprise. May, disapproving of Craig, ask him to sort out his problems in his own home, but Craig then tells to May that the issue also involves Peter. M.J. was soon acknowledge his father in reading the diary and furiously left to her home. Craig stay and reveals to the Parker of a condensed entry of M.J.'s diary of her rescue from the Green Goblin by Peter as Spider-Man (the Goblin, Spider-Man, and the Queensboro bridge where M.J. was endangered are omitted in the diary). Craig then demands answer from Peter as to what kind of danger she was in. Peter remains steadfastly quiet, and Craig then finally had it and tells him to stay away from his daughter and swears to have her enroll in another school if they both try to get together. May stops Craig's outburst and tells him to leave or being call in by the police, in which he then leave. May ask Peter as to what kind of danger M.J. was in. Peter at first remain to refuse to ask but lie to May of being in a park and saves M.J. from felling on "something". When May ask as to why he couldn't said that simple explanation to Craig, Peter state that he is "a jerk", in which May agrees with his nephew. Peter is however, worry that Craig might be M.J. in which May remedy his worriment by having a "walk" by the Watson with Gwen Stacy, and would call the police if they hear "anything happens".

After May and Gwen left for their "walk", Peter then suddenly notice something on television. The news channels reveals that a security camera caught Spider-Man chasing after Black Cat which leads to suggestions that the two committed the theft that Black Cat had committed and are accomplices. As Peter shockingly watches the news, he remembers what Black Cat had told him: "And that seven years' bad luck starts... right now."

Retrieved from "https://heykidscomics.fandom.com/wiki/Ultimate_Spider-Man_Vol_1_50?oldid=1462028"
Community content is available under CC-BY-SA unless otherwise noted.