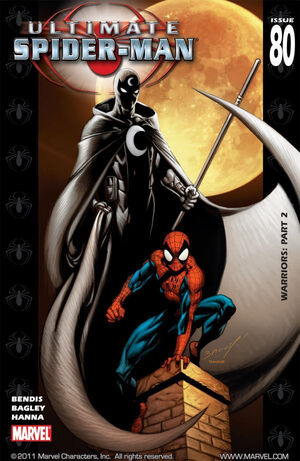 Stop running away from your life.

At Ryker's Island correctional prison facility, Danny Rand is being paroled after a spell in prison for killing a man with his "Iron Fist". Rand then promises the authorities not to use his power on others

At New York Harbor, Moon Knight is strangling Spider-Man for mistakenly believing that he destroyed the warehouse (in fact caused by Hammerhead). Spider-Man tries to explain that he didn't do it, but Moon Knight believes from the media that Spider-Man always appears when there is trouble. Spider-Man then catches Moon Knight off-guard and the two battle. While the two fight, Elektra spies on them as she reports to her superiors via radio headset. After the police and fire department arrive on the scene of the warehouse fire, Spider-Man escapes.

The next day at the Daily Bugle, J. Jonah Jameson and Robbie Robertson talk over the title of their article on Moon Knight, "The Moonman Cometh". Ben Urich arrives and informs them that the warehouse is owned by Fisk Enterprises. After Urich leaves to continue his investigation, Peter Parker arrives. He corrects Jonah's title, informing them that "Moonman" is in fact called Moon Knight. Receiving suspicious looks from Jonah and Robbie, Peter says he heard the name from his classmates. Jonah and Robbie believe him, but Jonah opts for Moon-"man" over "Knight".

At his work station, Peter is called by Aunt May who is concerned over Peter skipping school. Peter lies and says he spent the day reading in the school library. May asks if his reason for skipping school was due to his breakup with Mary Jane, to which Peter partially agrees. May decides to have a talk with Peter back home.

Meanwhile, Ben Urich contacts Fisk Enterprise asking if Wilson Fisk is available for comment on the warehouse fire to no avail. Peter eavesdrops on Urich during his call and decides to investigate Wilson Fisk.

As Spider-Man, he swings to Fisk Towers and lands on the roof. He is then confronted by Elektra. She tells him that Fisk would like to speak to him, to which Spider-Man is highly suspicious but accepts. Spider-Man is greeted by Fisk and is at first confused as to how he knew that he was coming, to which Fisk states he has security cameras all over the building.

Fisk then tries to tell Spider-Man that the people that he saves hate him and that they don't want to be saved, and do not like being reminded they are "weak" and "unspecial". Spider-Man rebukes his statement and demands to know what Kingpin wants.

Fisk then produces a photograph of Hammerhead and explains that the mobster is responsible for the death of Silvermane and the destruction of the warehouse, and that his motives are his ambitions for power over New York City. Fisk furthermore states that Hammerhead's struggle for power will endanger anyone who stands in his way including the innocents that Spider-Man is sworn to protect. To aid Spider-Man in finding the criminal, Fisk provides the address of Hammerhead's hideout, which it is written on the back of the photo.

Spider-Man then asks if stopping Hammerhead is only in Fisk's favor. Fisk points out it is in Spider-Man's favor. He explains that fighting Hammerhead is for the "people who can't fight for themselves", and would aid in regaining the trust of the people of New York. Spider-Man steadfast refuses to help Fisk, only for Fisk to counter back that Hammerhead is a threat to people around him, stating that Spider-Man is supposed to be a "hero". Spider-Man is driven at a word for loss as Fisk maliciously urges him to look at the written back of Hammerhead's photo.

Retrieved from "https://heykidscomics.fandom.com/wiki/Ultimate_Spider-Man_Vol_1_80?oldid=1462076"
Community content is available under CC-BY-SA unless otherwise noted.