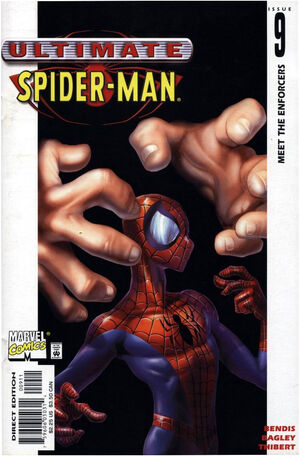 People are sheep. They'll read what you give them.

Appearing in "Meet the Enforcers"Edit

Synopsis for "Meet the Enforcers"Edit

In search of information about Kingpin's organization, Spider-Man follows the Enforcers up to a warehouse, where he immediately jumps into action beginning a fight with them. He eventually succeeds in immobilizing the criminal trio and he begins to interrogate them, but suddenly Mr. Big makes his appearance on the scene. Despite working for the Kingpin, he admits not to have at heart his best interests and he tells to Spider-Man about a gala that Wilson Fisk is going to hold in his tower. The intervention of FBI, which was following the Enforcers too, forces Spider-Man to quickly leave the place.

The next day, Peter learns with disappointment from the newspapers that Spider-Man is considered a menace by the authorities and, later, he has a debate about it with Mr. Jameson too.

The night of the gala, Spider-Man sneaks in Wilson Fisk's tower, but he's caught on security camera immediately after entering in Fisk's office.

Retrieved from "https://heykidscomics.fandom.com/wiki/Ultimate_Spider-Man_Vol_1_9?oldid=1461968"
Community content is available under CC-BY-SA unless otherwise noted.