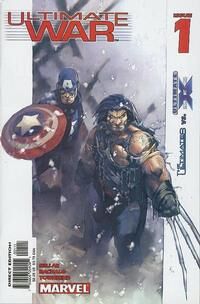 You have six calendar months to surrender your world to Homo Sapien Superior. During this time, we will prepare your new society and decide which of your races should be kept as slaves, which should be fuel, and which should be saved for our larder.

Appearing in "The Ultimates vs. The X-Men (Part I)"Edit

Synopsis for "The Ultimates vs. The X-Men (Part I)"Edit

Magneto has returned and has reformed the Brotherhood of Mutants. He conducts a massive terrorist attack that destroys the Brooklyn Bridge, killing over eight-hundred people. Magneto broadcasts his image all across Times Square demanding that the human population of Earth surrender themselves to Homo Sapiens Superior. Members of the Ultimates arrive and mount rescue operations.

In Washington, General Fury consults with the Vice President. The VP has been laboring under the impression that Magneto was dead. Fury informs him that all of Charles Xavier's reports confirmed Magneto's demise. The Vice President believes that Xavier is now working alongside Magneto.

Back in New York, the Brotherhood rest inside of a hotel room surveying the destruction on television. They are convinced that it would be impossible for the Ultimates to track them down. As if in response, Captain America crashes through the window and begins fighting them. The Brotherhood scatters and flees the hotel room. The rest of the Ultimates are waiting outside to take them down. Black Widow apprehends the Vanisher, While Hawkeye takes down Toad and Rogue with his custom-made arrows.

Later at the Triskelion, Quicksilver and the Scarlet Witch are escorted into the command center. They have been working for several months to provide the Ultimates with intelligence concerning the Brotherhood. Now, they are defecting completely and pledge to aid the Ultimates in any way they can.

Captain America sends Iron Man to track down the X-Men. Iron Man and a team of Ultimates security personnel arrive in Westchester only to find that Xavier's mansion is completely empty. He believes that the X-Men have thrown in with Magneto.

Retrieved from "https://heykidscomics.fandom.com/wiki/Ultimate_War_Vol_1_1?oldid=1548318"
Community content is available under CC-BY-SA unless otherwise noted.