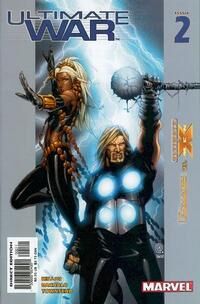 Weird that Charlie kits this place out with waterproof copies of Logarithms Made Easy, but doesn't think to cover the toilet paper with a plastic sheet in case the rain seeps in.

Appearing in "The Ultimates vs. The X-Men (Part II)"Edit

Synopsis for "The Ultimates vs. The X-Men (Part II)"Edit

The Wasp visits the home of John Grey, in the hopes of learning the location of his daughter, Jean. John is fiercely loyal to Charles Xavier's cause and refuses to hand his daughter's friends over to the Ultimates.

The X-Men meanwhile have retreated to an emergency safe house at Pier 88 in New York City. While Beast argues with Storm over a malfunctioning training program, the X-jet returns from a mission in the Savage Land. Jean Grey learns that Cyclops may have died in their most recent adventure.

At the Triskelion, the Ultimates discuss their strategy regarding the capture of Magneto and the X-Men. During the meeting, the power generators briefly shut down, and the Ultimates scramble to see what is going on.

Magneto breaks into the headquarters and begins wreaking havoc. Captain America and Thor try to stop him with their respective weapons, but Magneto easily turns them against their owners. He confronts his son, Quicksilver, and magnetically fires a machine-gun into the mutant's kneecaps.

After causing considerable damage and thoroughly demoralizing the Ultimates, Magneto takes his leave.

From Marvel Database, a Wikia wiki.
Retrieved from "https://heykidscomics.fandom.com/wiki/Ultimate_War_Vol_1_2?oldid=1546878"
Community content is available under CC-BY-SA unless otherwise noted.