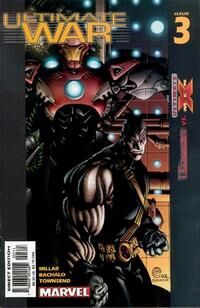 Banner turned into the Hulk and escaped from the holding bay when Magneto switched the power off, Steve. It was only a couple of minutes before the back-up generator kicked in and the gas knocked him out, but that was all he needed to break loose and eat the nursing staff.

Appearing in "The Ultimates vs. The X-Men (Part III)"Edit

Synopsis for "The Ultimates vs. The X-Men (Part III)"Edit

General Fury takes President George W. Bush to a secret neighborhood security area known as L.I.N.C.O.L.N. The acronym stands for Leaders in Need Christian-Only Lockdown Network. Fury has the Black Widow provide a rather showy demonstration of the haven's security measures for the President’s surprise and benefit.

At the Triskelion, Captain America discovers that Bruce Banner turned into the Hulk and ate several physicians during the time that Magneto was attacking the building. Knockout gas succeeded in stopping the Hulk, but now the Wasp and Cap are busy surveying the wreckage and making sure that Banner is kept securely contained.

In New York's lower east side, the X-Men group together and plot out their next move. Professor X knows that he is being linked to Magneto's treachery, and he is regretful of the fact that he concealed the truth about Magneto's fate from Federal authorities. Resorting to drastic measures, Xavier agrees to meet with Magneto for a one-on-one discussion at the Metropolitan Museum of Art. Xavier offers to join Magneto's crusade if he in turn agrees to move forward peaceably. Magneto is not convinced of Xavier's sincerity, but humors him nonetheless.

As Xavier leaves, he explains to Storm that he pretended to ally himself with Magneto in the hopes that his old friend would inadvertently lead the X-Men back to the Brotherhood’s secret base. However, Magneto turns the tables on Xavier and tracks the mutants down to their safe house.

Magneto would rather set his enemies against one another, than get directly involved himself, so he places an anonymous call to the Triskelion and tells the Ultimates where the X-Men are located. The Ultimates arrive at Pier 88 in the lower east side and prepare for the fight of their lives.

From Marvel Database, a Wikia wiki.
Retrieved from "https://heykidscomics.fandom.com/wiki/Ultimate_War_Vol_1_3?oldid=1546879"
Community content is available under CC-BY-SA unless otherwise noted.