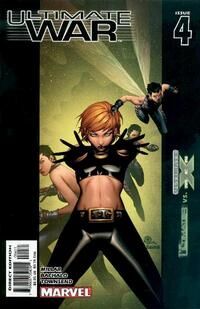 A new era for your X-Men begins tomorrow, but you, dear boy - no longer play a part in it, I'm afraid.

Appearing in "The Ultimates vs. The X-Men (Part IV)"Edit

Synopsis for "The Ultimates vs. The X-Men (Part IV)"Edit

Wolverine races through the streets of Manhattan's lower east side on his motorcycle, as two S.H.I.E.L.D. helicopters converge on his position. He speeds through a parking garage and launches himself off one of the upper floors onto the helicopters.

Meanwhile, the rest of the Ultimates raid the X-Men's safe house. Iron Man blasts downward, tearing through the building until he rockets directly into Colossus' path. While the two begin fighting, Storm creates a massive electrical storm outside. Thor flies down to engage Storm, while the Beast takes Professor X down into the sewer tunnels to make their escape. They manage to get to the X-jet just in time to effect a clean getaway.

Iron Man dislodges himself from Colossus' grip in order to pursue the X-jet, but Wolverine drops down from out of the sky (having apparently disabled the two S.H.I.E.L.D. choppers) and sinks his claws into the back of Iron Man's armor. The two combatants crash land back onto the ground.

When Wolverine gets up, he finds Captain America standing before him. Cap is surprised to learn that Wolverine has no memory of their time together in World War II. He uses this to his advantage however to draw Wolverine closer to him, enabling Cap to take him down with a machine gun. Captain America knows that Wolverine's healing factor will prevent him from dying, but the wounds are severe enough to slow him down.

Suddenly, Iceman arrives and uses his powers to freeze large portions of Manhattan. While everyone is distracted by the display, Professor X extends his telepathic control outward and places all non-mutants in the local area into temporary stasis. What he does not realize however, is that the Wasp is a mutant, and free to act against him. She flies down into his ear and disrupts his psionic control, rendering him unconscious.

General Fury's team flies into the battle zone and apprehend Xavier. They place him under arrest and take him to the Triskelion. While incarcerated, Xavier receives a surprise visit from an unlikely guest – Magneto. Magneto is able to sneak into the Triskelion without alerting the security sensors. He confesses that his entire plan involved setting the two super-teams against one another. He berates Xavier and warns him that he will soon take control of his X-Men.

From Marvel Database, a Wikia wiki.
Retrieved from "https://heykidscomics.fandom.com/wiki/Ultimate_War_Vol_1_4?oldid=1548319"
Community content is available under CC-BY-SA unless otherwise noted.