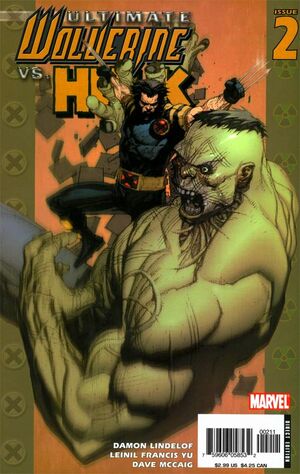 Bruce Banner lays unconscious on an aircraft carrier in the middle of the Atlantic, knowing he was guilty for the deaths of 815 innocents in New York. He knows this is his execution, on board with a megaton nuclear bomb set to take him out. Banner lays there in remorse, knowing everything his alter self did was wrong and while he is not responsible for what the Hulk did, there is nothing he can do and he deserves to die. As Iron Man flies away and the bomb detonates, Bruce's eyes turn green, transforming him into the Hulk, giving him the ability to escape the nuclear blast. The Hulk crashes into the ocean, angry at Banner for trusting Betsy when she tried to blow them up.

The Hulk walks up to Normandy, powering down and becoming Banner once again. A month later in Paris, Banner speaks to his therapist, telling her how calm he feels even after calling Betty. While Banner always hangs up after Betty answers, his therapist tells him that the only way he will be able to get over his anger is by actually speaking to Betty. While Banner is seen as adaptable to any situation, the therapist needs to see Banner get angry, just to release his repressed feelings about his former love. The more and more the therapist pushes, Banner becomes more annoyed but yet keeps his calm. It is not until she suggests Betty would say Banner is impotent that the Hulk finally emerges, tearing through Paris and killing more innocent people.

A month later in Dublin, Banner still calls Betty, never speaking when she answers. Banner now works for a farm and goes by the name of Bixby, maintaining a daily lifestyle that catches the attention of the other workers. Three of Banner's coworkers start to bully him over his vegan lifestyle, laughing because the have nothing to fear when it comes to Banner. Banner snaps once again, ripping apart the three farmers before eating the cows, showing how wrong the farmers truly were.

Another month passes, Bruce Banner moving east, still making phone calls to Betty. This time, a man answers Betty's phone sending Banner into another rage that can be heard throughout India. As another month passes, Banner makes his trek through Tibet, climbing a snow covered mountain with only a donkey to keep him company. He reaches a large door on the side of the mountain, only to be greeted by a frail old man inside. As they speak, Banner asks the man if he is Panchen Lama to which the man replies no, he is only Steve. Banner is looking for Panchen Lama to help with his anger issues believing he is the only one that can help him. Steve brings Banner some hot cocoa before leaving him with Panchen Lama, a young boy who is the greatest scholar in Buddhism, only second to the Dali Lama. Panchen Lama already knows the reason Banner has come to the temple, and offers him another way to deal with the beast within. Panchen sees Banner and the Hulk as one, knowing that it is not Banner who changes into the Hulk but the Hulk that is changing into Banner.

Another month passes, the Hulk sitting comfortably surrounded by a harem of women. Wolverine arrives, finding the Hulk in his chamber. The Hulk offers Logan a hot cocoa.

Retrieved from "https://heykidscomics.fandom.com/wiki/Ultimate_Wolverine_vs._Hulk_Vol_1_2?oldid=1496870"
Community content is available under CC-BY-SA unless otherwise noted.