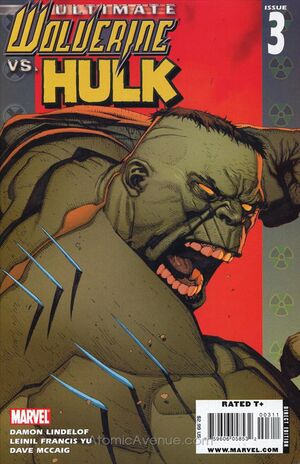 You're a twenty-foot monster surrounded by naked chicks in the middle of nowhere and you just offered me a &%*$^ing beverage. Nah -- I ain't surprised at all.

Hulk stands above Wolverine, asking which of his legs should he eat first. Wolverine refuses to answer, knowing the Hulk is not bluffing about choosing to eat one of his legs. Before the Hulk makes Wolverine's decision for him, Wolverine chooses the left leg, creating a discussion of what the Hulk is really trying to accomplish. No matter what, Wolverine will keep coming after the Hulk, even with a stump for a leg. During their chat, Wolverine and Hulk hear a sonic boom above them, Wolverine realizing the vehicle dropped something. Before Wolverine tells us what fell out of the plane, he takes a step back to remember how the hulk started beating his mutant body.

Wolverine flashes back to when he catches the Hulk in his harem, being offered a cup of cocoa. While Wolverine is hardly phased by the many scantly dressed women, Hulk is curious who sent Wolverine to kill him, knowing good and well it was Nick Fury. Hulk holds his own, simmering his rage as he saves face with Wolverine. Wolverine has no clue how Hulk became so smart, to which Hulk explains that by putting away all his anger, he discovered so much potential, something he recommends to Wolverine. Wolverine starts to poke at the beast, trying to get him angry by revealing Betty wants him dead even though she was in control of him the entire time. It is not till Wolverine asks if he can have his way with Betty that Hulk snaps, pummeling Wolverine into the side of the mountain.

Retrieved from "https://heykidscomics.fandom.com/wiki/Ultimate_Wolverine_vs._Hulk_Vol_1_3?oldid=1462229"
Community content is available under CC-BY-SA unless otherwise noted.