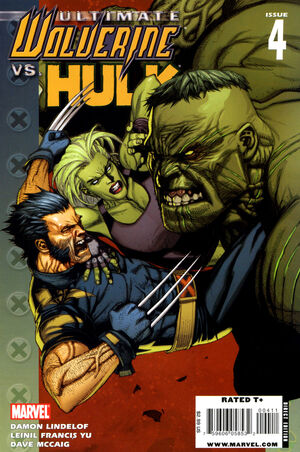 Betty reluctantly lays in bed with Freddie Prinze Junior when her home phone goes off. Freddie is the one to answer, not receiving any confirmation from the other side. Betty is curious who is calling, only to realize the number is from India and has to be Bruce.

Three weeks later, Jen Walters offers Betty an Altoid while they observe Nick Fury and Logan discuss he Hulk. Jen and Betty start to discuss Logan, Betty seeing him as an animal while Jen finds him attractive. The two women step on each others throats, judging each other on their sexual exploits, especially since Betty has always been attatched to the Hulk. As both women give each other death stares, Betty casually asks about the serum Banner injected himself with since Jen has been taking it off-premises to mess around with it. Jen believes she can make it work better by removing all of the rampage. The two women are discovered by Logan's strong nose, causing them to become silent.

A few days pass and in the basement of the Triskelion, Tony Stark and Steve Rogers play ping pong, Tony using an enhanced arm created by Forge. Betty comes in, demanding to know how long they have known about Bruce's survival. While everyone really believed Banner was dead, they had no clue if execution was possible. The two heroes joke about trying to keep up with every super powered human out there, even suggesting a registration process, which is quickly shot down by Tony. Tony tells Betty she would not understand any of what is going on as she is normal, she has no idea what it means to wield tremendous power and Bruce should be handled by those who do.

The next day, Jen starts testing the hulk serum on a lab rodent, turning on the Dead Kennedys to test the creature's reaction to rage. Betty comes storming in, finding Jen testing the serum. As soon as she demands to know what modifications were made, the lab rodent hulks out, growing twenty times its size. While the rodent is seen as a beast, it remains calm and able to be petted.

Betty speaks to Fury the next day, revealing to him that Jen is a traitor, shopping the serum to the Chinese. Betty gets Fury to authorize Jen to take the serum out of the lab, following her to find out if she really is a traitor. Fury allows it, giving Betty everything she needs.

Betty secures a Quinjet to take her where ever she wants, using a recording of Fury to get her way. Fury follows Jen, seeing her exchanging a briefcase for some cash. Fury and his team pin down Jen and her buyer, opening the briefcase to discover a bootleg copy of Star Trek. Fury realizes his mistake and tries to get a hold of Betty who has already departed. As the pilot of the Quinjet receives the order to turn around, Betty injects herself with the Hulk serum, transforming in front of their eyes into a female version of the Hulk. Before the agents can stop her, she realizes how much power she has, jumping out of the jet and falling towards the Hulk and Wolverine. Hulk instantly realizes the new creature is Betty, still bitter about her breaking his heart, promising to break her as revenge.

Retrieved from "https://heykidscomics.fandom.com/wiki/Ultimate_Wolverine_vs._Hulk_Vol_1_4?oldid=1531726"
Community content is available under CC-BY-SA unless otherwise noted.