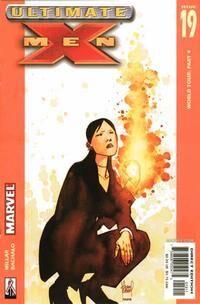 The X-Men come to a final confrontation with Professor X's son David. The reality altering mutant has possessed the body of S.H.I.E.L.D. agent Betsy Braddock and uses his own powers combined with Braddock's telepathic gifts to fight the X-Men to a standstill. During the fight, David teleports Charles to various stops on the scheduled book tour to murder innocent people at each location. Effectively undoing what Charles had done in a matter of minutes. David also angrily insinuates that Charles was a horrible father whom never did care about him and is about to kill him.

Braddock regains some form of control. She demands that Charles kill them but Charles refuses wanting to help his son and keep to his principles of pacifism. David is crushed by Colossus. However, during the fight, Iceman suffers major injuries sending him to the hospital.

Charles and David's mother, Moira MacTaggert hold a funeral for their son back in Scotland. The events involving David make Professor X realize he is willfully putting others in harms way for his dream. He feels the only solution is to disband the X-Men once they get back to New York.

Retrieved from "https://heykidscomics.fandom.com/wiki/Ultimate_X-Men_Vol_1_19?oldid=1462288"
Community content is available under CC-BY-SA unless otherwise noted.