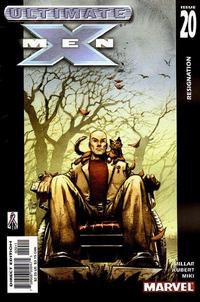 While The X-Men are in Auckland fighting The Acolytes, Professor X writes a letter to Cyclops to explain his reasoning for disbanding the team. He also says he is going to remove the mental blocks from Magneto. Before Xavier does give Magneto his memory back, he has a conversation with him. Magneto helps Xavier realize his vision is not naive and there is a need for his X-Men in the world. Professor X changes his plan and agrees to continue the team.

Retrieved from "https://heykidscomics.fandom.com/wiki/Ultimate_X-Men_Vol_1_20?oldid=1462290"
Community content is available under CC-BY-SA unless otherwise noted.