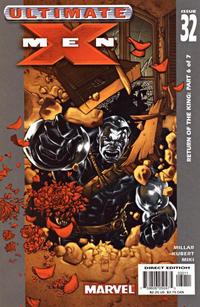 Appearing in "Return of the King (Part VI)"Edit

Synopsis for "Return of the King (Part VI)"Edit

Once the threat of Magneto has been stopped, things rapidly start changing for the X-Men. The duel between Wolverine and Cyclops escalates and falls pretty quickly, leaving a burned Wolverine off the team. Jean comes to terms with her enhanced powers under the influence of the Phoenix. Jean believes that the Phoenix was only her pyrokinetic powers taking form.

Since Xavier's and his X-Men's names have been cleared, S.H.I.E.L.D. and the president's cabinet discuss what is to be done with Xavier and his team. They are conflicted as the mutant threat continues to grow, making the US more vulnerable to attacks. Tony Stark and Nick Fury come up with a compromise, suggesting they make the Xavier Institute for Gifted Youngsters a training facility for future members of the Ultimates. With more and more mutants appearing each year, they are going to need all the help they can get.

Families are reunited at the Xavier Institute for Gifted Children as a party is thrown to celebrate the new investors of the school, as well as the acceptance of new students. After witnessing the death of Betsy Braddock, Xavier and Moria are surprised to find her psyche in the body of a young Asian woman. Beast is reunited with his bigoted parents, who have become more liberal since the last he saw them. Colossus is reunited with his Russian family and Rogue is brought in to join the X-Men.

Retrieved from "https://heykidscomics.fandom.com/wiki/Ultimate_X-Men_Vol_1_32?oldid=1462315"
Community content is available under CC-BY-SA unless otherwise noted.