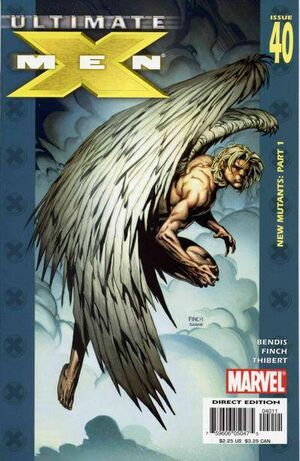 Xavier and Jean Grey make their way to one of the Worthington Estates to locate the 17 year-old son, Warren. The Worthingtons seem eager to get rid of their mutant son, whose powers are cosmetic.

When Warren is introduced to the other X-Men, Rogue makes note of Warren's angelic wings in comparison to Nightcrawler's demonic appearance. The news spreads of the mutant's angelic appearance through Beast's popularity online. People line up at the front gates of the Xavier School to see this rare appearance. This scares Warren as he is viewed completely differently than the rest of the X-Men. He flies off, leaving the school with no hopes of return. That is until Xavier sends Storm after him.

Storm calms the fears of Warren, telling him how being a mutant is different for everyone. It takes a toll for the X-Men because they are not seen as mutant or human, but are seen for which power they posses. Warren leaves Storm, flying to those occupying the front gate of Xavier School. He reveals to them, he is no angel, but he is only a mutant. The believers leave, seeing the whole event as a hoax. Beast is met in a diner by a shadowed figure.

Retrieved from "https://heykidscomics.fandom.com/wiki/Ultimate_X-Men_Vol_1_40?oldid=1462331"
Community content is available under CC-BY-SA unless otherwise noted.