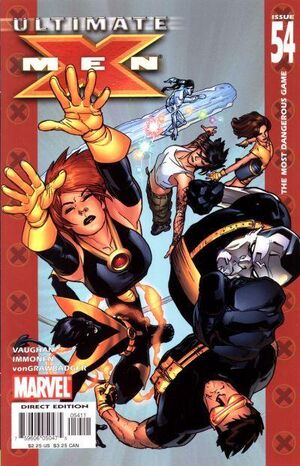 It's your call Heavy Metal. We gonna play on the side of angels again.... or we gonna raise a little hell?

Appearing in "The Most Dangerous Game (Part I)"Edit

Synopsis for "The Most Dangerous Game (Part I)"Edit

In the depths of the jungle, a mutant teen is being chased through the foliage by a human brute armed with a rifle. Even though they boy does not want to harm his pursuer, he has no choice but to defend himself, throwing a handful of razors at the hunter. After screaming in pain, the hunter speaks into his headset, having been told that his opponent would not be armed. The mutant teen looks to talk this out but the hunter does not feel like listening, hitting him to the floor with the butt end of his rifle. The mutant teen apologizes to the man, not about the murder of Lord Scheele, but about the bolt of lightning surging through his opponent's body. The boy yells to the sky for help, knowing someone is listening. A large, albino man appears in front of a screen showing the boy now alone in the woods, announcing that the condemned has survived another round. The man introduces himself as Mojo Adams and the audience have been watching Hunt for Justice and can catch updates online 24/7.

Kitty Pryde shows the program to Scott and Jean, not sure if the show is real or created for a certain audience. After hearing rumors of the program, Kitty hacked into a couple of foreign sites to see if it was legit and if it needed to be shown to the X-Men. Kitty brings up that this could be real as Kraven the Hunter did the same thing weeks ago until Spider-Man put an end to it. Jean goes ahead and alerts Xavier about the situation.

Xavier assembles his students to show all he has learned about the reality program. The program is being shot on the island of Krakoa off the coast of Genosia, a country whose government outlawed all mutants a few years ago. While many of the mutants went into hiding, the young mutant seen on the program, Arthur Centino, was hastily put on trial for the assassination of politician, Lord Joseph Scheele. Since all of Genosha treats mutants as a sub-human race, media mogul Mojo Adams has created the idea of publicly exterminating mutant criminals. Since the United States have not taken action against this unethical program, many of the X-Men become annoyed and angered over the treatment of mutants. Xavier refuses to attack a sovereign nation but decides to send a couple of the students over to observe Genosha and see if they can clear the young mutant's name. Colossus does not like the plan as he believes the X-Men should stand for their own no matter the consequences. Due to his outburst, Xavier forbids him from going on the mission and decides that only Bobby, Kitty, Jean, and Scott will be making the trip, leaving the other X-Men behind.

Back on Krakoa, a production crew go searching for Arthur Centino. Centino finds them first, dropping on them from the branches and knocking both crew members out. The boy takes the camera and speaks into it, telling Mojo that he will be the only one getting off the island as he is coming for him. While Major Domo wants to edit that portion out, but Mojo declines, seeing how gold the footage is. Major Domo is trying to reach out to a more universal audience, and with having a convicted assassin on the show, they are making a program that is insensitive to the family of Lord Scheele. To appease the audience, Mojo pulls out his wild card to handle the mutant.

At JFK, the X-Men arrive for their trip, taking the slow flight to Genosha. Scott is a little bit iffy about going undercover but Jean assures him that with her abilities, everyone in Genosha will see them as NYU students. As Jean and Scott walk into the airport, Kitty and Bobby get the bags out of the taxi. Bobby ignores Kitty's ramblings about Scott and Jean's looks of love, creating further tension between Bobby and her. Kitty finally snaps at Bobby, telling him that even though he blames her for Rogue leaving with Gambit, Bobby should at least treat her like a human being. Bobby shrugs her off once again, heading into the terminal.

In the Danger Room, the rest of the X-Men undergo training in one of Angel's programs with Colossus taking his anger out on the computer beings. Colossus is passionate about the dealings on Krakoa and what if it was one of their own in trouble on the island. Ali interrupts the simulation, asking if the rest of the team are going to do something about it. Since the youth have access to the Blackbird and Xavier is about to sleep for the night, they contemplate hot wiring the plane and taking off to Krakoa on their own.

Retrieved from "https://heykidscomics.fandom.com/wiki/Ultimate_X-Men_Vol_1_54?oldid=1462360"
Community content is available under CC-BY-SA unless otherwise noted.