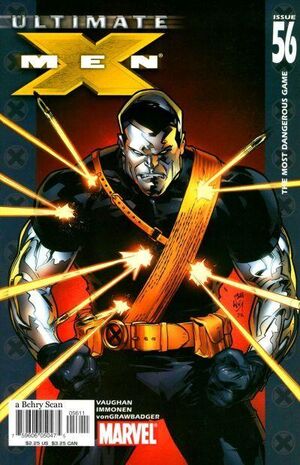 Appearing in "The Most Dangerous Game (Part III)"Edit

Synopsis for "The Most Dangerous Game (Part III)"Edit

On Genosha, the X-Men are confronted by a mutant with six arms. Having already knocked out Jean and placed a sword to her throat, Scott and Bobby go into the defensive, questioning their new opponent. The mutant know of the X-Men through clippings given to her by her sister in the states. While she was leaving Genosha, she recognized the X-Men as they were arriving, figuring out that they were going to destroy what she had done for the country, assassinating Lord Scheele. As she speaks to the X-Men, Kitty grabs Jean, phasing her to safety, giving Bobby and Scott the chance to attack.

Mojo and Major Domo are still struggling to get their reality show back into production. After rumors of extra mutants being seen on the island, the production crew refuses to venture into the field without protection and representation. Mojo threatens Domo, telling him that if he does not get a crew out there, he will broadcast Domo's address, knowing the mutant out for revenge will pay him a visit.

After Colossus ties Arcade to a tree, Longshot thanks the X-Men for coming to the rescue even though Nightcrawler thinks they should be thanking him. As the X-Men introduce themselves to the new mutant, Dazzler feels they should start making the trek across the Krokoa to Angel and the Blackbird. Unknown to them, while Angel had been worrying about the consequences for stealing the Blackbird, he gets kidnapped.

Scott and Iceman go on the attack, taking aim at the mysterious mutant who threatened Jean's life. As Scott lifts his glasses to fire his beam, the mutant reflects his ray off her sword, causing it to hit Iceman instead. As Scott is distracted, the mutant attacks with throwing stars, breaking his ruby shades and scratching his corneas. Before she an attack again, Iceman discovers a new power, allowing him to grab his new opponent yards away with an extended frozen arm. Having left two of her arms free, the mutant breaks out of Iceman's icy grip, warning him not to do that again. Before Iceman can question why, Kitty runs out of breath and phases through the ground, giving the mysterious mutant the chance to knock her out, gaining a new hostage. Before she can threaten Kitty's life, Jean rises, overtaken by the Phoenix once again.

Back in the jungles of Krokoa, the secondary X-Men team make their way back to the Blackbird. While Longshot is happy to be saved, he does not want to join the X-Men on their trip back to the US. He'd rather go back to Genosha, the place he calls home and has been part of an underground mutant resistance. As Dazzler leads the group, she sets off a trap, a mine propels out of the dirt ready to explode. Longshot jumps in the way, protecting Dazzler and luckily himself from any damage. While he understands the idea behind his powers, Longshot confesses to the group that he does not really know how it works. After the incident, Colossus decides to take the lead.

Jean has taken hold of her newest foe, causing her to believe that she is under attack by the flames of the Phoenix. As Jean speaks, a blind Scott has trouble believing it is actually Jean as she speaks in a different voice. Jean assures her love that it is her but she does not know what gets into her when this being overtakes her. Bobby heads over to Kitty, helping her up to her feet and telling her how awesome she was. Jean asks Scott if she wants him to help him see telepathically, but Scott refuses, knowing how to get around from when he first developed his powers. The team turns to their unconscious opponent ready to begin their interrogation.

The secondary team get closer to the Blackbird, Dazzler helping an injured Nightcrawler. Dazzler and Nightcrawler talk about Colossus and which team he really plays for. Nightcrawler misinterprets and knows that Colossus fights for them and would not even betray them, Dazzler on the other hand was talking about his sexuality. As they reach the clearing where they arrived, none of the X-Men can locate Angel, finding the Blackbird in tact and a video communicator in the sand with Mojo on the line. Mojo has taken Angel prisoner, and the only way they X-Men can free him is if they bring Longshot to him.

Retrieved from "https://heykidscomics.fandom.com/wiki/Ultimate_X-Men_Vol_1_56?oldid=1462363"
Community content is available under CC-BY-SA unless otherwise noted.