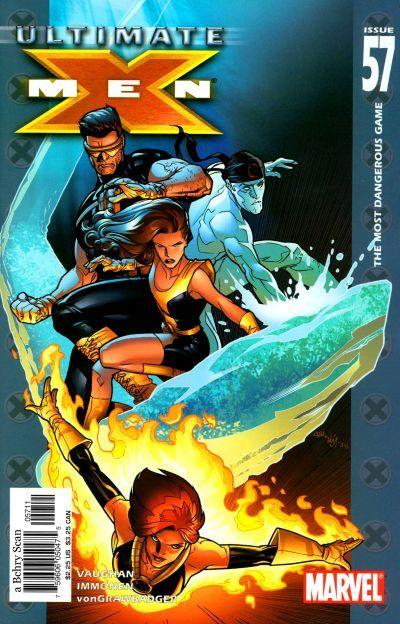 Appearing in "The Most Dangerous Game (Part IV)"Edit

Synopsis for "The Most Dangerous Game (Part IV)"Edit

Dazzler, Nightcrawler, Colossus and Longshot watch the feed of Angel hanging on Mojo's wall. As Longshot comes to the conclusion that he needs to turn himself in, the X-Men forbid him to do so, stating there is no way to know if Mojo will heed to his word. The mutants decide to storm Mojo's fortress, using what little energy he has left to teleport to Angel's location.

On Genosha, the X-Men main team take hold of their attacker, Iceman freezing her for Jean to probe her mind. The mutant reveals herself to be Spiral, and welcomes Jean into her mind to reveal the truth of Lord Scheele.

In Mojo's fortress, Mojo speaks to his new angelic prisoner, asking for forgiveness for holding him responsible for letting the true criminal get away. As Angel asks for mercy, Nightcrawler bamfs in, bringing both Longshot and Dazzler with him. With Nightcrawler's lack of energy, Nightcrawler was not able to bring Colossus with them. As Nightcrawler passes out, Mojo's troops start their attack, firing their guns at the mutants. Longshot takes the lead, using his luck to avoid the array of bullets to take down the opposing troops. Longshot becomes distracted by by a electrical short, giving Mojo the chance to lift the mutant off the ground.

In the memories of Spiral, Jean views the history of Spiral, Longshot, and the Genoshan politician. Spiral shows her relationship with Longshot. As their relationship blossomed, Spiral noticed that Longshot relied too much on his probability powers, making plans with her and then standing her up. After they had been dating for a few months, Spiral met Lord Scheele in a mutant club. Scheele wanted to know how the other side lived before deciding on going with or against the mutant ban. Spiral soon fell in love with the married politician, starting an affair. They kept their relationship a secret and it was all going well until they were caught.

As Mojo has his large hand around Longshot's neck, Dazzler fires her sparks into the studio lights, distracting the mogul, causing him to drop the mutant. Mojo scoffs at Dazzler's bright powers, not noticing the stage light falling above him. As Dazzler goes to check on Longshot, Major Domo holds a knife to the unconscious Angel, claiming that Mojo created this show for the mutants by helping the humans have a healthy outlet for their hatred. Longshot puts his foot on Mojo's neck, threatening his life to protect Angel's. Major Domo backs down, appeasing to the mutant now claiming to be a murderer. As Domo comes closer to close to Longshot, putting down his weapon, Longshot knocks him out, ready to beat him to a pulp before he is stopped by Dazzler. Colossus breaks through the wall, having missed all the action.

Back in Spiral's mind, Spiral and Scheele's relationship is found out by Longshot. Filled with rage over the human/mutant romance, Longshot comes at Scheele with a knife, plunging it into his chest and killing him, revealing him to have actually committed the murder. Spiral backs away from the crime, grabbing a vase behind her as Longshot turns to her. She takes the vase and hits Longshot on the side of the head, pushing Jean out of Spiral's memories. Back in reality, Jean shares the information with the rest of the X-Men, asking Iceman to release Spiral. Spiral explains that she loved Lord Scheele and he had changed. After their romance, Scheele changed his mind about mutants on Genosha but was killed by Longshot before he could announce his stand. Spiral moved both bodies in order to protect herself, knowing how the public would spin the news of the politician's death.

Outside of Mojo's fortress, the secondary X-Men team send Longshot off, asking him one last time to join them. Longshot declines, having his place with the mutant resistance on Genosha. Longshot jumps on a small boat, heading towards the main island. The X-Men watch him go, wondering how much trouble they are going to be in when they get back even though they saved this mutant's life.

Xavier scolds his students for leaving the school after they were instructed not to as they let a guilty mutant escape. While the secondary team still believes the mutant they met is innocent and he saved Angel's life. Xavier does not accept their plea, looking to punish one of them for the mistake they made. Angel takes the blame, protecting Dazzler from expulsion. After leaving Xavier's office, Dazzler thanks Angel for saving him, wrapping her arms around his neck and kissing him passionately, leaving Nightcrawler and Colossus the only bachelors left at the school.

Retrieved from "https://heykidscomics.fandom.com/wiki/Ultimate_X-Men_Vol_1_57?oldid=1462365"
Community content is available under CC-BY-SA unless otherwise noted.