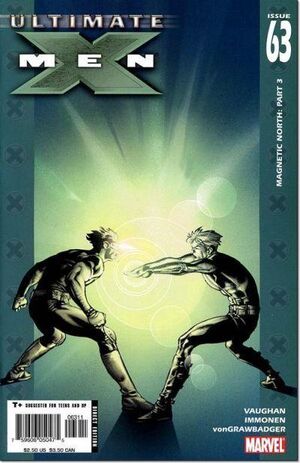 Jean Grey explores Scott Summers mind, curious about his relationship with Lorna Dare. Scott dislikes the idea that Jean can just summon up his memories. Scott gives in though, telling Jean that he started dating Lorna as both of them had powers. Scott became more interested in school while his brother was the opposite, and Lorna chose him over Scott. Cyclops tells Jean he is with her now, but Jean truly wants to know if Charles Xavier is sending Scott to stop his brother in order to stop him from breaking out Lorna himself.

Nick Fury takes Longshot down the halls of the Triskelion, showing him to his cell among the other mutants. On their way, Fury shows Longshot the other mutants they have in captivity, including Nathaniel Essex and Yuriko Oyama. Fury tells Longshot that they keep the real threats in the basement.

Magneto teaches Lorna chess, Lorna complaining that he is letting her win. Magneto laughs, knowing he has never purposely lost a battle and all the humans he has killed were not killed out of hate but killed out of love. The reason humans die, is in order to spare the blood of their fellow mutants. The deaths that come from their powers prove mutants make the sacrifices others cannot. A tearful Lorna hugs Magneto, learning to let go of the guilt.

Alex Summers and his classmates arrive in New York City after a long trip from Illinois. As they argue on directions, Nightcrawler appears on the hood of their car. The vehicle slams into a telephone poll, the passengers saved by the airbags. The X-Men leave their jet, ready to take down the teens. Nightcrawler identifies a couple of the mutants before the one called Cannonball charges at Wolverine, taking him far from the accident. Cyclops sends Nightcrawler to retrieve Wolverine and Shadowcat to make the others intangible before the get out of the car. Before Shadowcat reaches the car, she is knocked out by Northstar. Storm comes to the rescue, but before she can attack Northstar, Sunspot sends large blast of fire at her. Cyclops grows tired of the resistance, sending an optic blast at Sunspot. Havok steps out of the car, charging his power, ready for the throw down between him and his brother.

Although Xavier forbid both Angel and Dazzler from joining the rest of the X-Men on the mission, they leave the school anyway, Angel carrying Dazzler over the city. Dazzler wants to prove to Xavier that they can do what the others do. Angel has mixed feelings about the situation, somewhat believing something awful is going to happen. Dazzler assures Angel that if they get kicked out of Xavier's school, they will be together, traveling and even including him in her reformed band. To that notion, Angel stops mid-flight, kissing her in the air.

Havok and Cyclops use their powers against each other, even though they both know it is ineffective to them both. Havok sideswipes his younger brother with a tire iron, knocking him out cold. Northstar is shocked, but Havok assures him this was part of Scott's plan, knowing he wanted to save Lorna as well. With Northstar and Havok being the only two left from their team, Northstar picks up Havok and runs towards the Triskelion, being observed by Forge and Mystique. Forge is scared the two mutants are going to ruin Magneto's plan, but Mystique tells him otherwise, that they are Magneto's master plan.

Retrieved from "https://heykidscomics.fandom.com/wiki/Ultimate_X-Men_Vol_1_63?oldid=1462377"
Community content is available under CC-BY-SA unless otherwise noted.