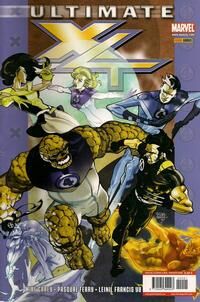 Charles Xavier is awakened by a bright being standing at the foot of his bed, telling him to wake his students as they need his help. She introduces herself to Xavier and his students as they come rushing in. She says she is General Lal-Qil-Atrox of the Fifth Arm of the Supreme Consistory and one of her ships filled with tough mutants is falling to Earth. She is asking the X-Men for help, as the cargo of the ship have one task, to slash and burn. The team readies for departure, Xavier asking Kitty and Bobby to stay behind to catch Wolverine up on the mission when he returns.

As the X-Men take off, Rhona Burchill sneaks around the Westchester campus, on an unknown mission. She sets off the alarm, alerting Bobby and Kitty there is an intruder on the grounds, leading them to jump into action. Iceman confronts Burchill, ready to attack but Burchill takes precautions and removes the humidity from the air, leaving Iceman powerless. Burchill attacks, blasting Iceman with a flamethrower. Shadowcat phases in, avoiding all of Burchill's attacks before being knocked out by expelling gas from Burchill's glove. Just when she thinks she is in the clear, Wolverine rips in, grabbing Burchill by the throat. She laughs, confusing Wolverine before he becomes dazed and knocked out cold.

Kitty reviews over the security footage, finding no trace of Burchill and her attack. They figure she was the one that sent the team away in order to steal Cerebro. The team figure out Burchill made a call while in their institution to the Baxter Building. While they know the consequences, the X-Men decide to go to the Baxter Building, hoping to finding the theif responsible for stealing Cerebro.

At the Baxter Building, Johnny Storm and Grimm fight over Johnny's music tastes, Grimm barging in and smashing his music player. As they argue, the X-Men, with Kitty's help phase through the floors of the Baxter Building, breaking in and appearing in front of Reed Richards himself. Wolverine, as always, jumps to the defensive, putting his claws against the neck of Reed. Reed argues that he knows nothing about the break-in at Xavier's school, Before Wolverine can attack, Reed stretches out, hitting the alarm.

Burchill waits in her sanctuary, receiving payment from A.I.M. for Cerebro. While Burchill accepts the money from A.I.M. she changes her mind about about handing over Cerebro, she still takes the money, citing that Cerebro can do much more in her hands than theirs. She places the machine on her head, waiting to see what the results are.

Guards in the Baxter Building show up, being easily taken out and avoided by the X-Men. While Kitty Pryde is phasing through her opponent's weapons, she discovers that there is one object she cannot phase through, Sue Storm's invisible shield. As Kitty is knocked out, Wolverine deals with Grimm, his claws out and ready for attack. Grimm takes out Wolverine in one hit, leaving Iceman to protect his team with a wall of ice. Johnny Storm laughs at the wall, knowing good and well that his flame powers can melt right through. Iceman is unable to move Kitty, who was knocked out in her untangelable form.

Rhona Burchell stands with the Cerebro system on her head, able to see everything going on in the world at once, looking in people's minds. Her mind surges straight to her main enemy, Reed Richards, able to sneak up on him miles away.

Retrieved from "https://heykidscomics.fandom.com/wiki/Ultimate_X4_Vol_1_1?oldid=1462449"
Community content is available under CC-BY-SA unless otherwise noted.