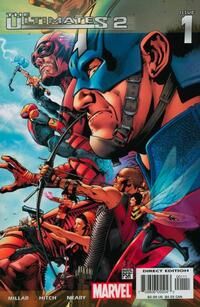 Listen up, scumbags: You know who I am and you know what I do.

It has been one year since the conclusion of the first volume of the Ultimates. Bruce Banner is under lock and key in the Triskelion after saving the world from an alien invasion. Steven Rogers and Janet van Dyne are dating after the events with Henry Pym. Anthony Stark is defending S.H.I.E.L.D. policy on talk shows. And Nick Fury has sent Steven Rogers and the rest of the Ultimates to Northern Iraq to rescue American hostages. Being that the Ultimates are a domestic anti-terrorism/metahuman task force, sending such a powerful group of soldiers across international borders does not sit well with the world community including former team mate Thor. And a security leak to the press reveals top secret S.H.I.E.L.D. files to an angry world: Bruce Banner is the Hulk. These missions are the tipping point for something more sinister just over the horizon.

From Marvel Database, a Wikia wiki.
Retrieved from "https://heykidscomics.fandom.com/wiki/Ultimates_2_Vol_1_1?oldid=1462453"
Community content is available under CC-BY-SA unless otherwise noted.