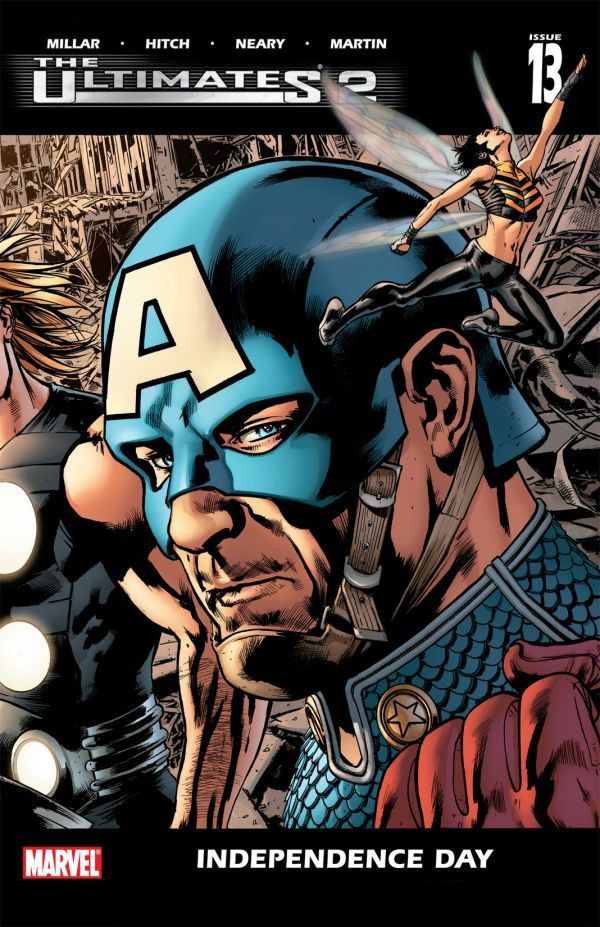 She was like me with magnificent breasts and, as you know, that's always been one of my ultimate fantasies.

The streets of Washington are gripped in chaos. Thor, suffering from flashbacks of the time spent in the hospital, lashes out at Loki with his hammer, smashing him into the ground. The Ultimates turn towards him in astonishment. Amazingly, Loki not only survives the blow, but rises up and reveals the full majesty of his power. As the true Asgardian God of Mischief, Loki opens up a mystical portal and hundreds of mythological creatures pour forward onto the streets of Washington. Loki splits himself into several doppelgangers and attacks Thor. He beats him into the ground and asks him how it feels to die alone in the dirt. Thor sneers and calls him an idiot. He asks him if actually thought he would come to the battle… alone.

Suddenly, a brilliant burst of rainbow colored light streaks across the sky. The heavens open; and the assembled soldiers of Asgard pour forward, ready to face Loki's army. Captain America is quick to join the fray and shouts, "Take 'em down!"

The battle is as massive as it is brutal; but concludes abruptly when Thor calls down the power of the lightning. A wave of electrical energy sweeps across the city finishing off the last of Loki's minions. The streets are clogged with the dead and dying. Thor mutters under his breath, "This planet is under my protection now".

After the battle, the Ultimates agree that it is time to part company from S.H.I.E.L.D. They all wish to continue operating as heroes, but without S.H.I.E.L.D.S.'s financial support, their future is truly uncertain. However, the image of the playful millionaire Tony Stark flying in his Iron Man suit offers Thor and the team a vision of hope.

Some time later, Hawkeye sneaks into the hospital where the Black Widow is held in intensive care. Enraged over the slaughter of his family, he pins her hands to the walls with two arrows, then releases a third arrow into her face, killing her.

At Tony Stark's penthouse, Tony has a drink and talks with Pepper over the loss of the Black Widow. Although heartbroken, Tony's libido is unchallenged, as he quickly forgets Natasha in favor of an attractive blond that he spies outside his window.

In a flashback to 1942 New York City, Steven Rogers promises to his lover Gail that he will come back to her after the end of the war.

From Marvel Database, a Wikia wiki.
Retrieved from "https://heykidscomics.fandom.com/wiki/Ultimates_2_Vol_1_13?oldid=1462466"
Community content is available under CC-BY-SA unless otherwise noted.