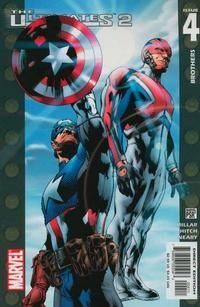 It is business as usual for the domestic fighting unit the Ultimates. Steve Rogers and Janet van Dyne's relationship is conversed about on talk shows. Not to mention Janet van Dyne's previous overly abusive relationship with Henry Pym. Protest in Europe are erupting against the new formed European super soldier program. When rioting breaks out in the protests, Thor openly fights Italian police in an attempt to defend the protesters. The Ultimates are yet again sent to a foreign country. This time they are introduced the the members of the European Super Soldier Program. The scientist in charge of the program Gunnar Golmen explains the origin of Thor's powers and fantastic Norse tales. They reveal that Thor is crazy and his suit was designed to turn a normal man into a super soldier, and that his belt was the source of his power. At a protest in Norway, the Ultimates make their move to take Thor down.

Retrieved from "https://heykidscomics.fandom.com/wiki/Ultimates_2_Vol_1_4?oldid=1565316"
Community content is available under CC-BY-SA unless otherwise noted.