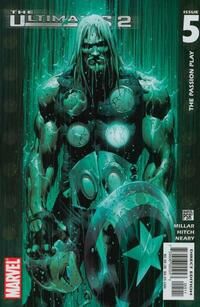 You kiss your mom with that mouth, soldier?

Appearing in "The Passion Play"Edit

Synopsis for "The Passion Play"Edit

The Ultimates and the European Super Soldiers are attempting to bring the son of Odin down once and for all. They fight Thor and use maximum force, but Thor is too powerful. Finally, Quicksilver is able to remove Thor's belt, rendering him powerless. Thor is down.

Later Thor is imprisoned at the Triskelion. Unbeknownst to the Ultimates, he is visited and belittled by Loki. Loki boasts about tricking them all. He also tells Thor there is a traitor on the Ultimates team.

In another part of the Triskelion, the Ultimates are summoned by Nick Fury. There is trouble in the Middle East.

Retrieved from "https://heykidscomics.fandom.com/wiki/Ultimates_2_Vol_1_5?oldid=1462458"
Community content is available under CC-BY-SA unless otherwise noted.