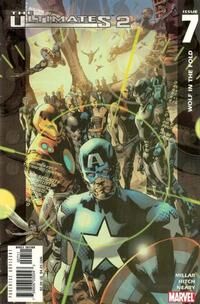 Appearing in "Wolf In The Fold"Edit

Synopsis for "Wolf In The Fold"Edit

The Ultimates once again invade a third-world country, removing them of their protection and missiles. Thor, who is in the same cell as Banner once was, is talking to Tony Stark. Tony still believes Thor insane. Thor tells Tony to stop the Ultimates aggressive acts. He tells Tony that they have a traitor amongst the team, and they have one more chance before the other retaliates. Janet is now having an affair with Hank. Janet says Steve still acts like people did in the 40s.

That night, Clint Barton is with his wife and kids in the kitchen. The doorbell rings. Clint's wife opens the door, expecting Scarlet Witch, but instead, a rifle aimed at her head. She is shot, killed. A bunch of men in suits with rifles crash into the kitchen from the windows. Two of the men go upstairs to get the children. Clint is shot. The men grab Clint's son. Clint kills the guards with kitchen appliances. As he holds his son, telling him to go to the neighbors house for help, blood splatters into Clint's face, and his son is dead. Someone enters, and Clint knows who it is. Bullet shells fly out of the figures gun.

From Marvel Database, a Wikia wiki.
Retrieved from "https://heykidscomics.fandom.com/wiki/Ultimates_2_Vol_1_7?oldid=1515343"
Community content is available under CC-BY-SA unless otherwise noted.