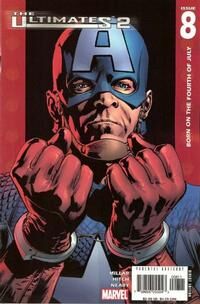 I never should have been brought back to life, Bucky. I thought I could fit in, but I can't.

Appearing in "Born on the Fourth of July"Edit

Synopsis for "Born on the Fourth of July"Edit

Janet wakes up, seeing Steve still awake. Steve said to her that he hasn't slept all night and reveals that he knows about Janet's affair. The two then heatedly argues of their failing relationship due to their personal differences. When Janet stated that she didn't slept with Pym, Steve runs off.

S.H.I.E.L.D. investigates the Barton's house finding Laura Barton, Callum Barton, Lewis Barton, and Nicole Barton, Clint Barton's entire family, all dead, with a missing Hawkeye. Nick tells the men at the Triskelion to check the secret security tapes Nick had placed, to see if the killer was seen on tape. Nick asks what they see. The men just stare at the screen, shocked.

Steve is with Bucky at his home. Steve tells Bucky that he has no other friends, no family, other than him. The two console with each other and go to the cemetery.

Nick prepares to release the Ultimate Reserves, and go after Steve Rogers, who they believe, and saw, killed Hawkeye and his entire family.

At Greenwood Cemetery, Steve and Bucky are talking about their lives. Steve relates that he shouldn't have been brought back to life in a America where he doesn't anymore. Though, Bucky interjects that he is still remembered in which a memorial was dedicated to him up to the 1960s. Steve stops, hearing some leaves break. Immediately, the Ultimate Reserves attack Steve, shooting him with dozens of tranquilizers. The one of the Rocketmen take Bucky safely out of the chaos, and begin to beat Steve down. Nick walks over, punching him in the face. Berating him that he is not the real Captain America and being responsible for the deaths of Hawkeye's family. Nick leaves before he goes crazy and kills Steve. As he walks away, Steve grabs a tombstone, and bashes it on one of the Reserves. He then beats down the soldiers, and runs for the helicopter. One of the Rocketmen is flying in the air. As Steve runs into the helicopter, the Rocketman flies Steve into the ground.

The Ultimates hear of what is happening and are shocked.

Steve is down. Lying in front of his statue memorial that was previously mentioned by Bucky.

From Marvel Database, a Wikia wiki.
Retrieved from "https://heykidscomics.fandom.com/wiki/Ultimates_2_Vol_1_8?oldid=1462461"
Community content is available under CC-BY-SA unless otherwise noted.