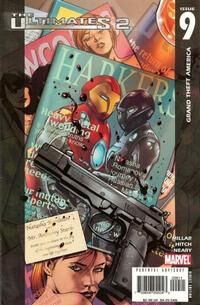 ... I'm The Lord of Mischief, Dynamo, and what could be more mischievous than World War Three?

With the Hulk "executed", Thor and Captain America in SHIELD custody, the Ultimates are in disarray. Hawkeye is also missing and presumed dead. In actuality, Hawkeye has been captured and all of his access codes to America's defenses have been taken from his mind.

The remaining Ultimates meet with Nick Fury. However, the Black Widow convinces Tony Stark to skip the meeting and stay in bed with her. Tony readily agrees. Pietro finds it hard to believe that Captain America is a traitor. As the team discusses the latest string of events, the Triskelion falls from the sky. The defense codes have been broken, and the Liberators have launched a massive invasion of New York City, Los Angeles, and Washington DC. Loki gloats and relishes the thought of World War III on Midgard.

Tony hears the turmoil, but the Black Widow suddenly pulls a pistol from behind her pillow and puts it to Stark's head. Jarvis inadvertently enters Stark's bed room, and the Widow is able to shoot her long time nemesis, Jarvis, directly through his forehead. She then turns her full attention to Stark as she straddles his naked body in their bed.

The Ultimate Reserves (the Giant-Men and Rocket-Men) as well as Pietro, Wanda, and Nick Fury try to stop the invaders. However, the Liberators have the upper hand and are slaughtering a number of SHIELD agents and Reserves. The Liberator's leader, the Colonel, declares Washington D.C. and the nation under his control. To Be Continued.

From Marvel Database, a Wikia wiki.
Retrieved from "https://heykidscomics.fandom.com/wiki/Ultimates_2_Vol_1_9?oldid=1462462"
Community content is available under CC-BY-SA unless otherwise noted.