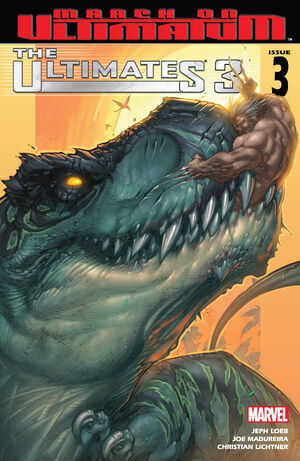 The Ultimates decide to break up into two teams: one sent to find Magneto in the jungles of the Savage Land, and the other remaining in New York to investigate the Scarlet Witch's death. As one team meets with new allies in the Savage Land, the Wasp makes a shocking discovery: the man she thought to be inside Tony Stark's armor is not a man... but a machine!

Retrieved from "https://heykidscomics.fandom.com/wiki/Ultimates_3_Vol_1_3?oldid=1462468"
Community content is available under CC-BY-SA unless otherwise noted.