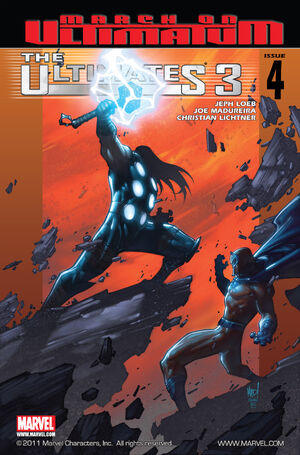 They think of us as toasters-- alarm clocks-- and vibrators. But when the war between man and mutant is settled-- and most of the human population is dead, only then will they realize-- the machines have already won.

Who rules the Savage Land? Who could possibly challenge Magneto's authority? How about the Ultimates with special guest Wolverine! Plus: back in NYC, the Wasp makes a discovery that will change everything! The most-talked-about series from superstars Jeph Loeb, Joe Madureira and Christian Lichtner charges toward Ultimatum!

Retrieved from "https://heykidscomics.fandom.com/wiki/Ultimates_3_Vol_1_4?oldid=1505955"
Community content is available under CC-BY-SA unless otherwise noted.