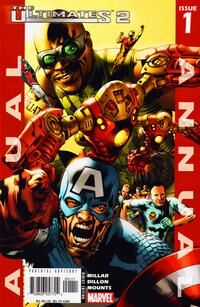 My critics say I'm paranoid, but I have to be paranoid. The papers say I'm crazy, but it's a crazy world I'm trying to protect you from. There's a gun at your head twenty-four hours a day and it's my job to make sure that the bad guys don't ever pull the trigger. I'm building this army for your own good... Trust me.

The Ultimates launch their new Reserves. The "Goliaths" and the Rocketmen are sucessful. The "Four Seasons" struggle with their identity and powers. Most unfortunately, the sucessor for Captain America, a young man named Lieberman injected with the Super Soldier Serum, fries his nervous system fighting a massive fire and dies.

Retrieved from "https://heykidscomics.fandom.com/wiki/Ultimates_Annual_Vol_1_1?oldid=1462469"
Community content is available under CC-BY-SA unless otherwise noted.