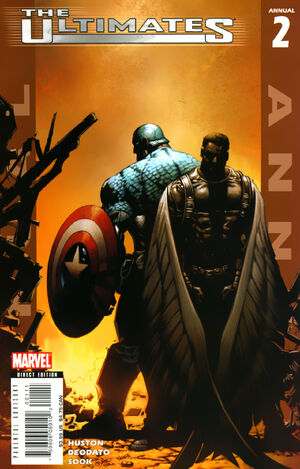 Appearing in "The Ultimates Annual 2"Edit

Synopsis for "The Ultimates Annual 2"Edit

Following after the aftermath of the Liberators' invasion of America, the heroes of New York City helps to repair the damages in their city and searching for survivors, as well in some of the heroes lifting a fallen Statue of Liberty out of the city's bay. In a political radio talk-show, two commentaries are arguing over the events happened after the Liberators' invasion in which one commentator argues that the nation and its heroes are only focusing on repairing New York City while the rest of the nation suffers accounts of freed criminals roaming and ransacking the country.

In a flashback to World War Two, Captain America learns from a young boy about a secret Nazi fortress in the mountains where the "ghost men" are. After traveling to the fortress Cap discovers a mass bodies which are heavily paled white.

In the present, Cap wakes up in the morning from his apartment and hears a radio news about a trail of mass bodies dubbed 'ghost corpses' are founded in southern Missouri leaving Centers for Disease Control officials dumbfounded. After hearing this Cap is filled with a shocking expression.

Back in Cap's flashback, Captain discovers the hidden fortress which is adorn with impale human beings. Cap scale the fortress' walls, taking out a mutated Nazi guard, and seeing the inner courtyard layout with a window-light laboratory and prisoners. After being surrounded by the fortress' guards Cap lands into the laboratory, interrupting scientist Arnim Zola.

In the present, Sam Wilson, the Falcon brought Cap to a monitor bearing Arnim Zola. Shocked in seeing the mad scientist, Cap is confused that he thought he was dead the last time he countered him, but he never saw him died, and now is responsible for the 'ghost corpses'.

In the past, after killing Zola's guards Cap states to the scientist that he is over. However, Zola summons Siegsoldat, his large monstrous creation, to attack Cap. But, Cap quickly dispose the monstrosity by decapitating it with his shield in which the monster's corpse fell on Zola, apparently crushing him to death. However, in the present the Falcon narrates to Cap that after Zola was 'killed' and the fortress that was liberated by Allied forces, the O.S.S. kept Zola alive in order for him to work on America's Super Soldier Program. However, when Zola's tumors were close to degrade his brain the American government mapped his brain and created an Artificial Intelligence to preserve his intellect. Hearing enough of Zola's banter Cap destroys the monitor screen.

"I'm still ironing out details, but the basic idea is a road trip across America with Cap and Sam," Huston stated. "What I'm interested in digging into is the relationship between a white man who has a 1940s mentality and a contemporary black American. You frequently get to see Cap reacting to the brave new world of the 21st century, but what about the 60 years he missed? What does he think about all the stuff that went down while he was frozen? And, you know, he's gonna throw his shield at some bad guys along the way."
— Charlie Huston

Retrieved from "https://heykidscomics.fandom.com/wiki/Ultimates_Annual_Vol_1_2?oldid=1462470"
Community content is available under CC-BY-SA unless otherwise noted.