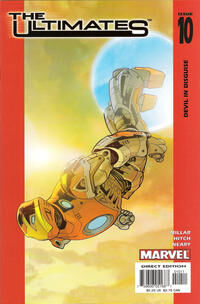 Who are we? Well, let's just say the past has come to haunt you, Mrs. Pym.

Appearing in "Devil in Disguise"Edit

Synopsis for "Devil in Disguise"Edit

In a flashback to 1944 Poland. As Captain America hangs from a train engine as his enemy Herr Kleiser taunts him for failing in his mission in intercepting a load of parts for the Nazis' super weapon, and allowing many of the Allied hijackers to die. However, Captain points out to him that he and the others didn't came to hijack the train but to "blow it up". Shocked, Herr Kleiser commands his men to shoot Cap but he manage to jump off the train before it explodes, killing everyone and presumably Herr Kleiser on board.

Twelve months later in Marrakesh, Morocco; Steven Rogers is briefed on the Germans of being ahead in their nuclear weapons program (again) and that their development is based from the middle of the Atlantic Ocean, bringing the possibility of a nuclear strike on either London, New York, or Washington D.C. Cap questions if Herr Kleiser, in which rumors has it that he is alive, ever have any connections to the nuclear program in which General Eisenhower states that the alien has everything to do with anything, and also points out that Kleiser survives anything.

In the present, the Ultimates and S.H.I.E.L.D. forces heads to Micronesia via helicarriers. Nick Fury notice something wrong with Cap. Rogers only replies that the mission that they're undergoing is hauntingly similar to his last mission in Iceland. Nick assures him that this time he is "coming back."

Back at the Triskelion, Janet Pym notice that everyone in the sick bay are absent. She then finds several staff workers and questions them that she has been trying to call anyone for a drink but receive no answers. One of the staffers escort Janet back to her room and assure that everything is alright. As Janet turns her head around she notice a staffer dragging a body. Knowing something wrong she shrunk herself and avoiding a gunshot as it kills one of the staffers, who are revealed to be Chitauri agents. Janet quickly flees into the building's ventilation system.

Meanwhile, the helicarrier fleet arrives in Micronesia as the Ultimates and S.H.I.E.L.D. soldiers storm the Chitauri facility. However, Thor and Iron Man, who were ahead of the fleet, informs that they have scoured the entire place and find it entirely deserted. Despite this Nick Fury orders an entire sweep for any clues and weapons.

Back at the Triskelion Janet desperately attempt to contact with S.H.I.E.L.D. and the Ultimates that they are in a trap.

In Micronesia Captain America immediately notice something is wrong and calls out Iron Man. In the facility a group of S.H.I.E.L.D. soldiers find a nuclear bomb and it is immediately detonates engulfing the entire island and destroying the helicarrier fleet.

At the Triskelion, a defeated Janet talks to one of the Chitauri who admits that he has manipulated S.H.I.E.L.D.'s Psi-Division into giving false information to the organization in killing their enemies. He then informs Janet that he has blocked all her communications and sealed all the vents, and advise her to "sit tight". In the last panel the 'man' reveals to be Herr Kleiser.

Retrieved from "https://heykidscomics.fandom.com/wiki/Ultimates_Vol_1_10?oldid=1462480"
Community content is available under CC-BY-SA unless otherwise noted.