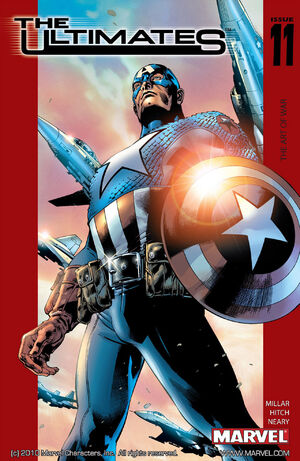 Appearing in "The Art of War"Edit

Synopsis for "The Art of War"Edit

With all the heroes and soldiers dead thanks to the Chitauri, Herr Kleiser goes after the Wasp, who is in a locked room. Kleiser easily captures Wasp, and puts her in a test tube. As Kleiser walks with Wasp to a helicopter, he elaborates about how and what people will think and know about all the deaths and what's to happen. He says that the Ultimates' story was that they died in a plane crash, or possibly a terrorist attack, and the soldiers did sign a contract which risked their lives. Kleiser then tells Wasp that parts all over the entire universe has some alien beings like them, who are just 'cleaning' the universe.

After they fly away, they land in the Arizona Desert, where the main site is for the attack. Another alien introduces Wasp to some 'gamma-butyrolactone', which suppresses humans thoughts. He says that by the end of the decade, not even one person will be able to form one independent thought. Wasp then asks why all the Chitauri have German names. Kleiser tells her that in that past a human named Kleiser was one of the many who surrendered themselves to the aliens. He tells Wasp: "One must consume to become, you know..." He gives Wasp a hint that he will be her soon.

Out of nowhere, partially damaged Chitauri spaceships enter from the atmosphere, startling everyone in Arizona. Many other huge ships, hundreds of times bigger than a jumbo airplane, are flying over Arizona. Kleiser goes to see the 'head' alien. He asks why the Chitauri aren't using cloaking devices. The alien tells Kleiser that it doesn't matter anymore, because the entire Chitauri race is being fought back at from every part of the universe by their enemies forcing themselves to retreat to Earth's solar system (derived as the "backwater" part of the universe), so there is no time to 'harmonize' Earth, only to blow it up and retreat in "the lower fourth-dimension". Wasp yells at Kleiser that he can't destroy the world, and Klieser responds by correctly telling Wasp they are going to destroy the entire solar system. Suddenly, another Chitauri drone inside the Triskelion tells Kleiser that they picked up something from Micronesia. A bolt of lightning comes out of nowhere at the Arizona base, killing some Chitauris. Kleiser goes to get ready (freeing Wasp in the process), as the Ultimates, and hundreds of SHIELD soldiers appear from the smoke. It is revealed that Iron Man's force field helped saved many of the soldiers and Ultimates from the nuclear blast, allowing Thor to transport everyone all the way back to Phoenix with his hammer, Mjolnir. Cap tells Iron Man and Thor to go into the sky, attacking the Chitauri ships. Nick Fury tells everyone to cover Cap, as Cap runs into the enemy forces. Cap sends a message to all of the Army, Marines, Navy and the Air Force, to fight for their lives and country. Cap pushes an alien out of a plane, saying: "Your country needs you." To be continued...

Retrieved from "https://heykidscomics.fandom.com/wiki/Ultimates_Vol_1_11?oldid=1462481"
Community content is available under CC-BY-SA unless otherwise noted.