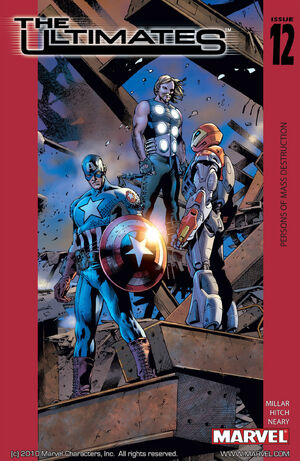 You think this letter on my head stands for France?

Appearing in "Persons of Mass Destruction"Edit

Synopsis for "Persons of Mass Destruction"Edit

Thor and Iron Man are causing chaos destroying every alien aircraft they can see. Herr Kleiser tells Captain America from a communicator to start the fight. Cap agrees, and drives a jet into Herr Kleiser, ejecting out of the plane before the jet and Kleiser smash into some oil tanks. A huge explosion erupts, and Cap immediately gets bombarded by Kleiser, and they start fighting. Cap starts to get the upper hand right away, slashing Kleiser with his shield across the head. Kleiser attacks back, hitting Cap several times before Cap can finally get free. Kleiser starts to rant, annoying Cap, forcing Cap to lose focus and just try to hit Kleiser. Kleiser again gets the upper hand, kicking Cap's head into the ground.

Meanwhile, Hawkeye is shooting at Chitauri soldiers from a humvee, when his car is hit by a smashed alien aircraft. Hawkeye yells at Iron Man for the alien wreckage raining on the ground. But Iron Man says it's Thor, who's just swinging his hammer around, destroying everything randomly. Thor tells Iron Man to get low, so Thor can blast a dozen spaceships in one time. All the ships drop to the ground, as Thor continues his attack.

Nick Fury sees Kleiser beating Cap down with debris. Fury calls S.H.I.E.L.D. to activate a invisibility sequence. As Kleiser beats down Cap, Fury shoves his gun next to Kleiser's eye, shooting, and dropping Kleiser. Kleiser again gets up, with a huge hole in his head, which heals, and Kleiser starts to beat down on Fury. Meanwhile, a huge ship is falling straight down over Phoenix, and there is nothing to do. Suddenly, Iron Man comes in the picture, flying under the ship, and bringing the ship away from the city. Unfortunately, Tony Stark has lost all his power, and his confidence. As U.S. army soldiers help Tony out, Tony continues to tell the soldiers that he can't be Iron Man anymore. That he can't do this anymore. A soldier replies: "Well, if you can't, who will? Tony thinks about it, and decides to continue. Using a power grid from a nearby street light, Tony recharges, then flies back into the action. Underneath everything, Wasp and Black Widow are killing Chitauri deep inside the base, and are trying to figure out how to stop the Chitauri's bomb. But when they realize: The instructions are in alien language.

Above ground Kleiser is strangling Fury, and then he pushes Fury away. Kleiser focuses again on Cap, telling Cap he should surrender already, because he can't win. Kleiser wants Cap to tell him to surrender, and this enrages Cap. Cap head-butts Kleiser, then hits Kleiser in the head, while grabbing his shield. Cap gets over Kleiser, screaming: "SURRENDER??!!", and stabs his shield into Kleiser. Cap then continues with saying (read the quote above). Cap pulls out the shield from Kleiser's chest and walks away with Fury. Fury contacts a soldier in a helicopter to traumatize Bruce Banner (who is also on the chopper), and the soldier begins to beat down on Banner, hoping to turn Banner into the Hulk, so Hulk could help above the chaos. Banner tells him that he put so much antidote into his system that he could never turn into the Hulk even if he was paid a "million bucks" to do so. Fury tells the soldier to go to "Plan B", and the soldier throws Banner out of the helicopter...

Retrieved from "https://heykidscomics.fandom.com/wiki/Ultimates_Vol_1_12?oldid=1462482"
Community content is available under CC-BY-SA unless otherwise noted.